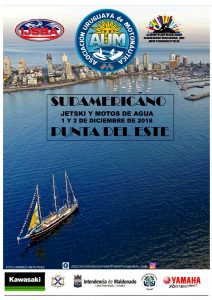 IJSBA is proud to announce that Asociacion Uruguaya de Motonautica (A.U.M.) is the newest IJSBA International Affiliate.  A.U.M. will be an integral figure in the growing South American racing contingent.

The IJSBA South American Championships have been growing in attendance and prestige and gathering support from numerous sponsors funding agencies.  With A.U.M.’s participation, the racing in this region just became even stronger.