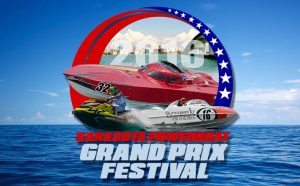 P1 Aqua X is awesome.  So what do you call their most awesome event?  Some super double bonus awesome extravaganza?  Maybe.  If you aren't going to be there, you can still be part of the cool awesome club by watching it on live stream this weekend.  Here is the official press release:

As thousands of people converge on Lido Beach this weekend for the 32nd annual Sarasota Powerboat Grand Prix you will be able to watch the action courtesy of a live stream from the race site. The Powerboat Grand Prix Festival gets underway tonight with a huge block party featuring live music and food vendors from 6 pm - 11pm. Then on Saturday, the P1 Superstock and P1 AquaX races will run from 9am - 4:30pm local time off Lido Beach. On Sunday, the racing starts at 9am local time with live streaming throughout. This is the link for the live stream and a preview of the racing can be found : here.