This just in from Valentin Dardillat’s press team : 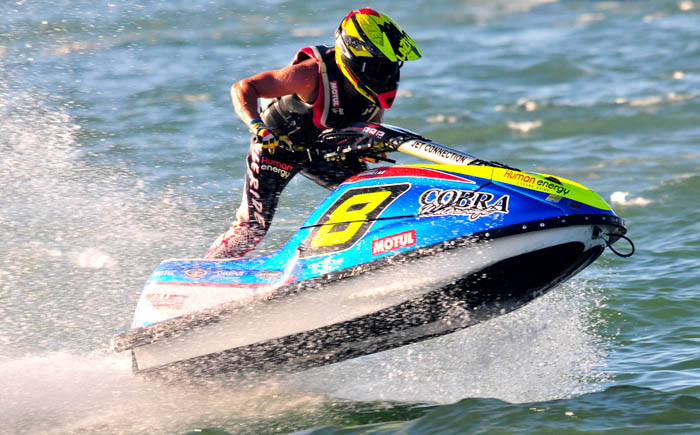 Valentin Dardillat completed his championship season on October 12th in Lake Havasu City and confirmed his status of World Vice Champion. An excellent performance from the French number 1 ensured that he ended the short season in the best possible way – on the podium at every round he participated in. But the 2014 season is not quite over for the Cobra Watercraft pilot, as he will also compete in the King’s Cup in Thailand on December 6th.

How was your 2014 World Championship season?

Valentin Dardillat : "Well, there’s a lot to say. The most positive point this year was that we didn’t encounter any big problems with my jet, like I did last year. Everything started out well as I won the qualification series, and that gave me confidence and put me at ease. In the three rounds I had a good rhythm, but I had to fight really hard as the 4-stroke jets have changed dramatically as they’ve been developed. In the first two rounds I finished 3rd. The conditions meant the water was moving a lot and I had to be super vigilant to ensure I didn’t make a mistake! After that things changed……."

What happened at the end of the second round?

VD : "In the second round, two of the pilots ahead of me were disqualified. One for avoiding a tyre-jump and one for missing a buoy. The decision of the jury to disqualify them meant that I was in first place and at the end of a really tough event it looked like I could be World Champion. But later the jury reversed the decision and I was back to square one and further from the title!"

How did you feel?

VD : "Obviously I was really disappointed! After the deliberations and discussions I thought I would be in the lead after the third round. I tried really hard all year, and it was so difficult against the 4-strokes, but next year I will have the same engine as my closest rivals – so we will be on equal terms!"

Are you ready for the King's Cup?

VD : "Yes! It’s a really major event in the jet-skiing world and to be included on the entry list as a ‘selected pilot’ is really exciting and it motivates me a lot! Although it’s not a championship race it’s probably the biggest event of the season and I intend to put in 110% effort!"

What's your averall assessement of the season?

VD : "The season was in line with my expectations. I was on the podium at every race I attended, and I took the European title. Everything went really well and I’m satisfied with what I achieved but I still feel I can improve. I think I’ve made the right choice for the last two years."