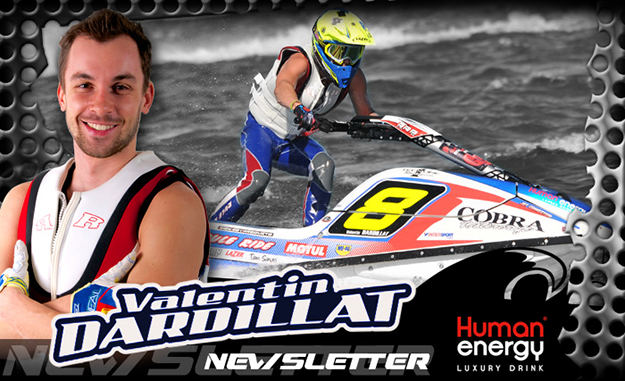 This 3rd and 4th of May, Valentin Dardillat will start his 2014 season at the first of three races in the European Championship that will take place at the Eau d'Heure lake in Belgium. During the winter season, the Cobra Watercraft sponsored rider has been preparing to go after the win, notably by reinforcing his physical preparation. After a short visit to Guadeloupe to film a video with Pascal Vallée (para-motor World Champion), Valentin feels ready to face his rivals on a National and International level.

How are you feeling at the start of this new season ?

Valentin Dardillat : "Everything's going well. I've been following a specific program this winter by alternating physical and mental training alongside riding my jet ski. I've got a full program this year and I'll have to stay focused. We've made some improvements to my machine to make it more competitive and more versatile so that it's more effective on the different race tracks. I'm feeling confident. "

You mentioned a full program. What meetings will you be attending ?

VD : "In about ten days we'll be starting the European Championship in Belgium and there are 3 meetings. Three weeks later, the French National Championship (The Freegun Jet Cross Tour) will start in Pont à Mousson and there are a total of five meetings. I will also be taking part at the World Championships in the USA as well as the King's Cup in Thailand. Depending on my budget it's also possible that I'll be taking part at some of the US West Coast Tour races. It depends on dates. On top of my racing calendar, I'll be representing my sponsors at several small and fun events. I'm going to be busy between May and October!"

What are your objectives ?

VD : "I've already won all the titles but in different years. Of course it would be amazing to defend my European title, to win the Jet Cross Tour and especially to regain the world title. Last year, I was disappointed to lose out because of a mechanical problem and this year I hope to do better. I think that my physical preparation will be my best ammunition but anything can happen in racing! "