IJSBA Has received this from Valentin Dardillat’s Team: 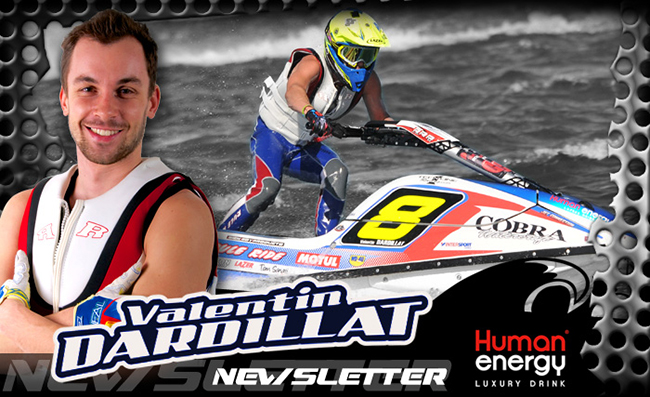 Pochlarn in Austria was the host venue this weekend (July 19-20) for the second of the three rounds of the European Championship. Leading after the opening round, Valentin Dardillat again imposed his dominance, having notched up two victories and a 2nd place by the end of the weekend. Consistant, quick, and incisive runs saw the champion and his Cobra Watercraft confirm the expectations of his fans and supporters, and further widen in the gap to 2nd place Kevin Reiterer. The championship final will take place on August 24 in Doncaster.

How was this second round of the European Championship for you?

Valentin Dardillat : "Pretty good! There is no qualifying and the choice of grid placement is made according to the championship standings so I was able to place myself where I wanted. It was a very fast track and I hoped to get a good lead. In the first race I was third to begin with but I quickly managed to take second place. Kévin had a decent lead and I had to settle for second place. But in the next race I got a better start, I went ahead immediately and I kept a clear advantage until the finish. I also won the last race on a technicality."

So, what happened in the last race of the day?

VD : "Well, I was third. I was gaining time on the two leaders but they were faster than me on the bottom section of the circuit and they pulled a gap on me. However, they unwittingly went the wrong side of a buoy and it was deemed by Race Direction that they had benefitted from it. Therefore they were penalized and that put me in first place. This kind of thing rarely happens, and I know they weren’t deliberately trying to cheat. I took the overall win and I’m really satisfied and looking forward to the next race."

How did you feel during the race?

VD : "For me everything is getting better and better. Physically I was in great shape and the only problem I experienced came from my jet ski – I lost a little bit of power on the bottom section of the circuit. Despite its cooling system the engine got a bit too warm – it was a really hot day as the venue was kind of in a bowl and there was very little air..... "

When is your next event?

VD : "It will be in two weeks; the final of the Jet Cross Tour Vichy. I'm having trouble closing the gap to Kevin for the lead, but I intend to keep my second place…"