Updates And Notices From Morocco

Greetings from Agadir, Morocco where we are attending the last round of the 2017 IJSBA Endurance World Championships.  While here, there is a great deal of difficulty communicating with the IJSBA server back in The States.  Some emails have been bouncing back and there has been difficulty accessing some of the media files.  Please be patient as these we are catching up as fast as possible.  Please do continue to send in spelling error and posting errors so they can be corrected- in many cases you are seeing the published page before it can be seen here.

In other news and topics from Morocco:

- IJSBA has been having several meetings with organizers from the Atlantic side of the American Continents and we are going to be announcing some exciting new events and series for 2018 very soon.  These events will include an emphasis on sportsman level competitions intending to bring budget racing to the recreational minded consumer in some of the most beautiful locations on the planet.  IJSBA is partnering with affiliates in renowned destinations for a new form of "racecation."  Please stay tuned for these developments.

-The draft for the upcoming Mod Lites class will be released within the next two days.  We would like to receive comments on these rules as fast as possible so the class can be officially announced in January.

-Drafts for the 2018 Competition Rule changes are being compiled but will not be released until after the Kings Cup event has concluded.  Please send any suggested rule changes now if you have not already.

-The dates for the 2018 World Finals are set for September 29-October 7 with October 8 being held as an "overflow day" for scheduling purposes.  No official activity will be scheduled for October 8.  While weather, in Lake Havasu City, is traditionally predictable, we had two heavy wind days in 2017.  Fortunately, the IJSBA staff was on top of things to get us through on scheduling but we did run pretty late on Sunday.  Depending on who you listen to, many people are suggesting that there will be major shifts in weather patterns around the globe.  We are not getting into this debate.  However, we are going to reserve an overflow day if we need it.  Some of this may seem a little unusual, or silly, even, but, these things must be done in permitting and planning these days.  While we are apologizing for this, we might as well apologize for the four page waiver that emerged, in 2017, for IJSBA events in the United States.  That waiver isn't getting any smaller either.

-IJSBA has been approached by an interesting amount new companies interested in producing Personal Watercraft.  The popularity of the sport continues to grow.  The trade show portion of the 2018 World Finals should be quite the event to attend.

-IJSBA offices will be open November 22 (the first full day back from Morocco) and then will be closed until November 28.  December hours to be announced.

-Orders to receive and IJSBA Competition Membership, as a gift, must be received by December 12 for card shipping on December 13.  IJSBA does not guarantee card shipments before Christmas after December 13.

Questions or comments relating to this posting may be sent to info@ijsba.com.  Email access is limited while in Morocco. 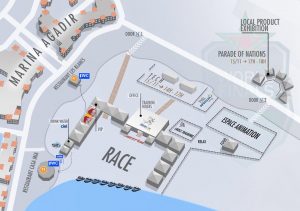