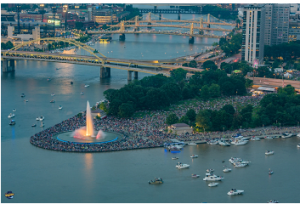 The Pittsburgh Three Rivers Regatta is one of the largest festivals with record crowds and media excited to watch the USA Freestyle Tour action sanctioned by the IJSBA. This IJSBA event will feature competitive and freeriding events along a large, busy boardwalk. Massive crowds of people will be cheering on the freestyle riders during weekend starting around 2pm all three days.

Pittsburgh Three River Regatta is the final round of a four stop IJSBA USA Freestyle tour that started in Detroit, followed by the Trenton Roar on the River & Oswego Harborfest, and finishes at the Pittsburgh Three Rivers Regatta August 5-7 weekend.  This event qualifies freestyle riders to the IJSBA world finals in Lake Havasu on October. Any riders interested in attending please contact Typhoon Tommy Nuttall at Tommy@jetskishows as access to pit area and parking requires a special pass.
The 2016 Regatta is moved to August 5-7 and will also include Formula 1 boat racing, Red Bull air force, Extreme pogo stick, marketplace fun, extreme events, BMX stunts, sand beach and sculpture,Wheel of Lights, Anything That Floats Race,3 Rivers Proud Boat Parade, people watching, live music on the main stage with the Gin Blossoms, Better Than Ezra, American Authors, Rodney Adkins, and many others. The weekend ends with the ”Celebrate America" fireworks and is one of the best in the nation.
By Scott Frazier|2016-08-05T19:19:45-07:00August 5th, 2016|National News|Comments Off on Typhoon Tommy’s Three Rivers Regatta Freestyle Show This Weekend