P1 racing will be back in Torquay for two days of fast, furious and free to watch action this weekend (2nd & 3rd September) as more than thirty jet ski racers compete for national honours at Beacon Quay. The UK series has already visited Scotland and Wales this summer, and spectators around Haldon Pier will be treated to some tense and dramatic competition in the seven races featuring both Endurance and Sprint classes.

Global Head of P1 AquaX, Lisa Barsby, herself a former world champion jet skier, said: “Torbay is an outstanding event arena, with its superb sea views and busy harbour creating a great atmosphere for both racers and spectators. We staged successful race events here in 2013 and 2014 and received a very warm welcome and tremendous support. We hope that there will be crowds lining the harbour wall to enjoy the climax to the AquaX season as well as jet ski freestyle displays over the two days.”

Deputy Harbour Master, Nick Burns, is pleased to be welcoming back the P1 AquaX competitors: “Having hosted this national race series in previous years, we are confident that the event will attract spectators to the harbourside and we look forward to seeing the UK champions crowned at the podium celebrations on Haldon Pier on Sunday afternoon.”

Riders in Torquay will be competing not only for national titles but also to quality for the P1 AquaX World Championship to be staged in Key West in December. This inaugural event reflects the series’ position as the world’s fastest growing jet ski competition and will see the best racers from the United States, the UK, Europe and Malaysia do battle in a spectacular show on the crystal clear waters of the Florida Keys. 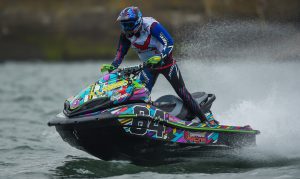 One of the riders looking to secure his trip to Key West is 27-year-old Joe Harvey from Wolverhampton. He leads the Enduro Pro class standings and can expect lots of local support. “I spend a lot of time in Torquay and it’s where I do my AquaX training” explains Joe. “I’ve been coming here and getting out on the water since I was a young boy and I know that the conditions in the bay can be tricky, especially when there’s an easterly wind that can produce big swells. I’ve had a cracking season so far in both the UK and European championships, winning eight of the nine races I’ve competed in, so I’m coming into the final round in a strong position and feeling confident. But it’s racing and anything can happen.”

Racing will start at midday on both Saturday and Sunday, and Lisa Barsby added: “We include jet ski freestyle displays to bring a new dimension to our events that really captivates spectators. World and national jet ski freestyle champions Lee Stone and Jason Bleasdale deliver high-speed, high-energy routines, complete with back flips and barrel rolls, and will perform in the harbour across the weekend.”