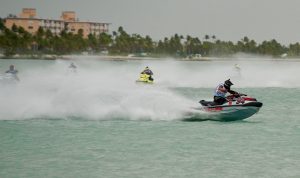 Racers have given Sea-Doo a lot of championships over the years and Sea-Doo loves to give back to their customers.  This year, we are excited to learn that Sea-Doo is offering a nice little payback to racers at all IJSBA Closed Course Events, in the USA, when the criteria is met.  Thanks, Sea-Doo!  Please see the official press release and 2018 Sea-Doo X-Team Bounty Payout below:

Valcourt, QC, CANADA– April 10, 2018 – Sea-Doo enters the 2018 watercraft racing season with tremendous buzz and excitement with the launch of the new RXT-X 300 model. Anticipation is high for the redesigned Sea-Doo RXT-X to make its official debut in the popular P1 AquaX enduro racing series. New riders will be joining the X-TEAM in 2018 and all Sea-Doo racers competing is select events are eligible for the Sea-Doo Bounty racer contingency program.

The 2018 Sea-Doo RXT-X 300 watercraft is poised to follow in the dominant racing wake of championship proven Sea-Doo RXP-X; the two-seat watercraft that has set the handling standard in closed course racing. The RXT-X 300 enters the enduro racing world with new ST3 hull and lowered rider center of gravity that combines to offer more 30% more stability at rest and when charging through big water at speed. The new design innovations, including the rider Ergolock system that allows riders to better connect with the machine, has the racing community excited for the start of the 2018 season.

BRP will sponsor premier racing events including the P1 AquaX Series, IJSBA World Finals and others and will see elite racers representing the Sea-Doo X-TEAM in 2018. These racers include, Erminio Ianstosca, James Bushell, Mohammad Burbayea, Claude Clayton, Tim Ducat and fan-favorite Anthony Radetic. Radetic, who is a former Army Helicopter pilot and renowned, challenged athlete who has limited use of his legs. Radetic will also be an ambassador for XPS lubricants and maintenance products. Joining the X-TEAM in 2018 is the JET-X team from Ontario, Canada with Pro rider Jay Edworthy who will be at the helm of a new RXT-X 300. Edworthy will join Iantosca – the Sarasota AquaX champion - and Radetic as favorites to finish on the Pro Enduro podium at P1 AquaX events.

The X-TEAM riders and all Sea-Doo watercraft riders will be eligible for Sea-Doo X-TEAM Bounty. The Sea-Doo X-TEAM contingency is essentially an, “open-sponsorship” that excludes no one, except those competing on other brands. To supercharge the P1 AquaX season opener in Miami an additional $1500 bonus will be added to the $1000 Pro Enduro win bounty for a $2500 top finish incentive. In addition to the glory that comes with winning on Sea-Doo watercraft, comes the opportunity for extra prize money.

“Sea-Doo is ready to compete for championships in AquaX with the new RXT-X 300,” says Tim McKercher, of Sea-Doo watercraft competition management. ”Sea-Doo’s global fan base including the dealer network, owners and race fans are excited for 2018 as we’re looking to extend our race-proven success to Enduro racing with the new RXT-X platform.”

For a complete overview of the new performance line of Sea-Doo watercraft, visit www.sea-doo.com.

READ ALL APPLICABLE RULES BELOW TO QUALIFY

Sea-Doo, RXT-X, RXP-X, SPARK, ACE, and 4-TEC and the BRP logo are trademarks of Bombardier Recreational Products Inc. or its affiliates.