Round One Of The Peru National Endurance Series

The beach at Bujama, an enclave south of Lima, was full of Personal Watercraft Racing enthusiasts and competitors as the Federacion Deportiva Peruvian De Motonautica, the IJSBA affiliate in Peru, opened their first event of 2016.  All of the sport, in South America, has been growing, largely, due to Peru’s efforts.  There was no exception to the opening round, here: Peruvian pilots were joined by competitors from Argentina, Uruguay and Columbia.  Also, because the President of IJSBA Peru was competing, the head of IJSBA Argentina, was brought in to officiate.

Categories included:  F1, F2, and H.  H was the Novice Category and was newly labeled per media requests to have a consistent description of all classifications.  “H” stood for huevos, eggs in English, with the idea that these racers would eventually hatch into Expert and Pro level competitors.  As with many Endurance Organizations, F1 stands for Open Class, F2 stands for Open Class where two pilots share the duties of tackling the endurance course.

In a real testament to Peru’s promotion of IJSBA Racing, exactly 15 new, first time, Novice racers showed up to participate in this event.  As the competition was already designated as a surf race, the organizers created a separate course, beyond the breaking waves, where Novices competed with only minor swells.  A rolling start was used in order to keep the neophyte competitors out of the shoreline conditions which were more suited for experienced riders.  This was a well conceived idea as the surf here consisted of fairly regular 3-5 foot waves with occasional surprises as high as 14 feet.  The podium results for this category were as follows:

Open Class means power and power means speed.  Where a single rider might get worn down by completing all laps individually, a very athletic racer can keep a fast pace and will not lose the time that it takes to switch riders.  The winner of the F1 Class, and the overall winner of the race, had a lead of more than 60 seconds over second place.  Top three were as follows:

The next endurance race, in Peru, will take place June 18, 2016.  For more information, please visit:  fdpm.pe

We hope you will enjoy these pictures:

A press conference was held at the Sports Center in Lima to announce new developments in the sport of PWC Racing, in Peru, as well as to open the racing season. 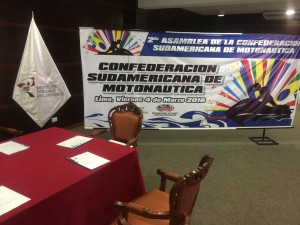 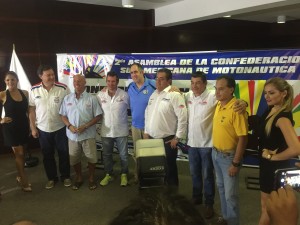 After the press conference, the crew was invited back to Anibal’s house where Vito prepared Lomo Saltado, a traditional Peruvian bbq dish of beef, tomatoes, onions, and potatoes (those of us who couldn't eat meat on Fridays were forced to hear, second hand, how delicious it was.  The veggies can be verified as awesome!) 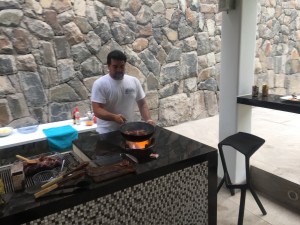 The city of Lima was filled full of these advertisements.  IJSBA World Champion, Paloma Noceda, is running for an elected position in Peru’s Congress 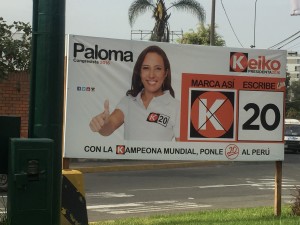 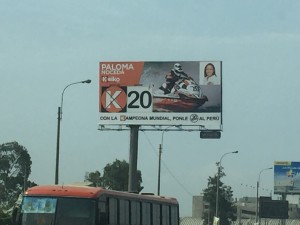 The beach as it was waiting for our arrival.  Peruvians can turn this into a race course in less than 2 hours! 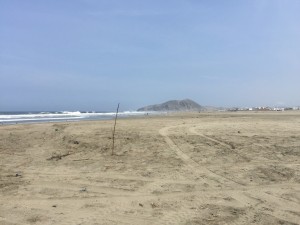 Anibal Aliaga is interviewed by the media. 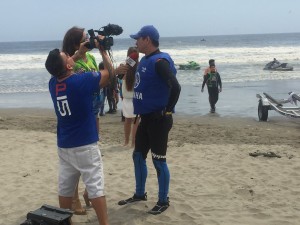 The start of the F1 class with Daniela Pereyra getting the holeshot.  Pay attention to her future as a rider! 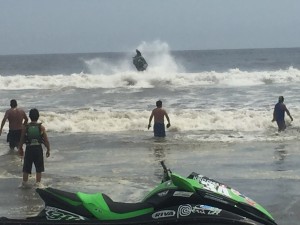 Spectators and crew members look on to see who is coming in as the lead for the first lap. 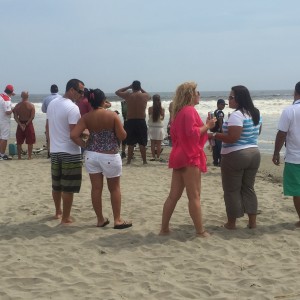 A rider switch in the F2 Class 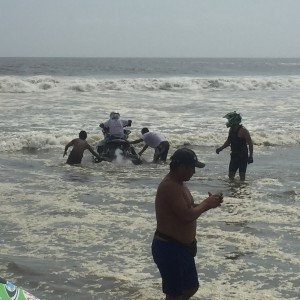 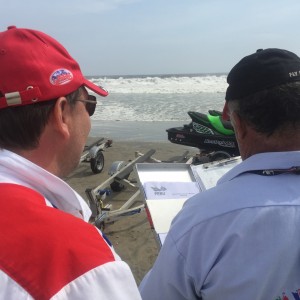 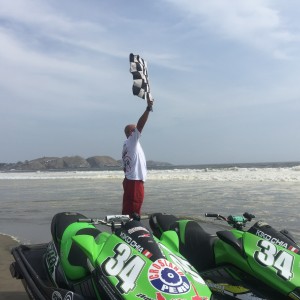 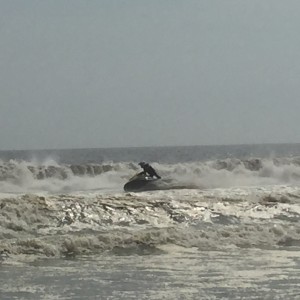 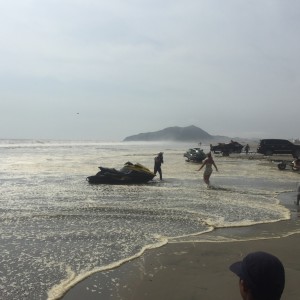 Trophies awaited the winners who took a group picture after the ceremony: 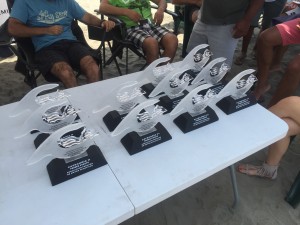 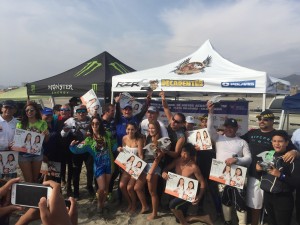 After the last visit to Peru, I was requested to share some personal experiences with touring the area while on assignment.  This is about the only personal time I had...

Sometimes, no…always, there are wonderful opportunities to immerse yourself in the environment which has hosted a PWC race.   Br is one such place.  It is many things: a surfer beachscape, a day trip retreat for Lima’s hard working residents, and, today a location for a bunch of watercraft people to take over a stretch of sand.  The promenade, where all of the tourist serving restaurants and beer shacks line to face the beach, could be like any other on Peru’s coast- or Mexico’s coast, or Indonesia’s cost… you get the picture- there are many of these around the world.  However, in each of them, there is a different grouping of souls, individuals who decided not to be a city working cube dweller or a corporate chain employee, or god forbid a lawyer.  Instead, folks, here, decided that hospitality was the way to make a living.  And, in times where sales are slow or tourism is down, the worse you are exposed to is an empty bay where you can see waves crashing against a scenic beach for hours on end without ever getting bored.

Always, no…. sometimes, I am a bit persnickety on where I will go to sit down and catch up on the IJSBA work and write an article or two.  Today was one of those days.  Some idiot gave me a few large glasses of Pisco to celebrate the end of the event and, like a bigger idiot, I drank every one of them on an empty stomach.  To get this article done while minimizing red lines and punctuation errors, I would need to get food in my stomach.  The "cafes" of tattered brick sides, covered with repurposed wood roofs, were not an inviting place to eat. much less the only menu offering-seafood.  Canvasing the promenade, I found, by far, the cleanest establishment and it had four real walls and a roof.  Moments inside, it became apparent that the cleanliness is due to the building also serving as the family residence after hours.

Next to the three (empty) indoor customer tables sets an L-shaped sofa parked in front of a television, DVD, and strangely placed audio mixing system that doesn’t seem to have a purpose for being there.  Above an integrated stereo system sits a picture of a loved one with adjacent incense burning.  A camera shy elderly woman hand peeled onions behind a curtain leading to the kitchen.  Conversation revealed a single mother, and her own mom, carrying on after the loss of her husband.  Determined people who have not wavered in their commitment to set high standards in cleanliness and quality in an area where it is the norm to charge the most and offer the least.  I am sure the food I ate was a portion of what the family would consume later- if it was good enough for them, it was good enough for me.

I was able to enjoy a long conversation in broken English/poor Spanish.  The family loved living there and it was easy to see why. It was a slow day for tourism. Likely, this was  because PWC took over the beach frontage here so the weekenders would be gather about a half mile away.  I was glad I was able to be a paying customer here and get to know this group of people even if briefly.

Peru has done much to ramp up their presence in PWC racing and they have been bringing all of South America with them on this journey to prominence.  It is only today that I have realized that I have been here about as many times as I have Thailand yet Peru has not yet achieved the world recognition that comes to The King’s Cup.  Hopefully we will change that, everyone should visit Peru and race here.  It is a wonderful place.  When you do come, please get to know the locals! 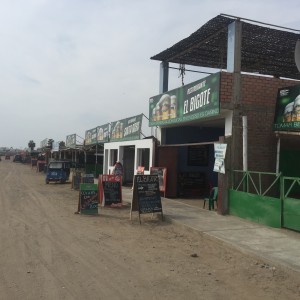 A small boat sits in one of the undeveloped sections of the beachfront vendors.  The seafood is reputed to be freshly caught each day. 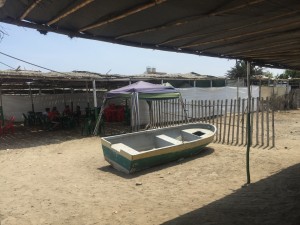 The café where this article was mostly written 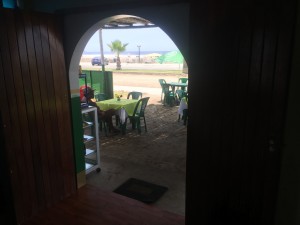 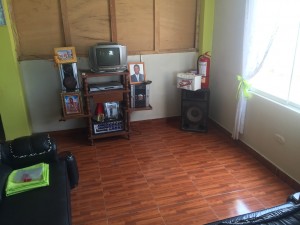 A home chef does not believe she is photogenic 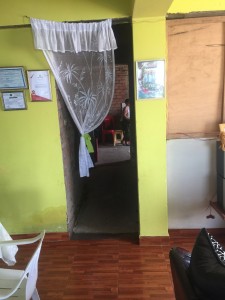 The view from the café was as amazing and comfortable 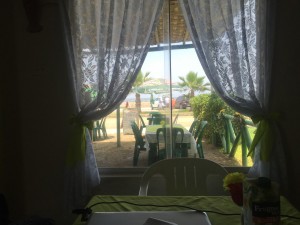