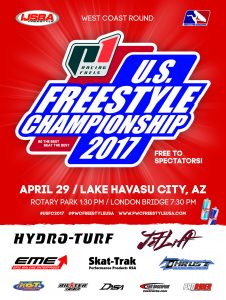 This is a second year for the freestyle only tour in USA after crossing over from Europe where tour started 6 years ago.

Freestyle competition will be held at Rotary Park in front of the Skate Park at 1:30 PM

for the Best Trick Of The Night competition will move to London Bridge Marina under the famous London Bridge.

This part of the event is scheduled to start after dusk at 7:30 PM.

Event is free to spectators.

Competitors should register for the competition via official website: www.PWCfreestyleUSA.com