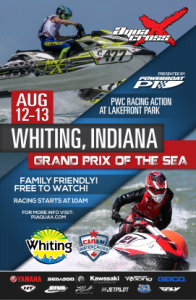 Powerboat P1 AquaX racing returns to Whiting Lakefront Park for the Second Annual Grand Prix of the Sea August 12-13. All the racing action runs between 10:30 am - 4:00 pm each day free and is free to the general public.

This year Powerboat P1 has partnered with CanAm Watercross for this race to serve as their final round of closed course racing for the 2017 season. Whiting is the first round of the North East Series for AquaX and will feature professional and amateur racers competing against each other under amateur rules. Eyes are on Jay Edworthy from Canada who will be returning to defend his North East AquaX National Title from last season.

For more information about this upcoming event visit: P1AQUAX.COM