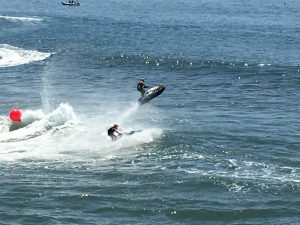 The IJSBA office is open with an excited atmosphere after returning from a fun an nostalgic weekend at Huntington Beach, California.  Through the extremely hard and tedious work of RPM Racing's Ross Wallach, and some support from Hot Products, IJSBA Racing returned to the most famous pier of Orange County.  Vendors, sponsors, and competitors all turned out for the first shot at what is sure to be an exciting and recurring unity of surf racing and Surf City. 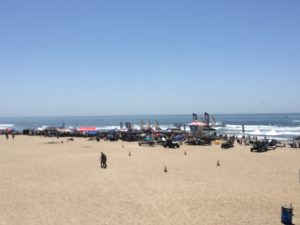 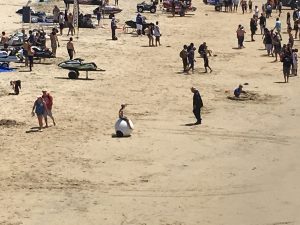 Surf City is an American treasure of a song performed by Jan and Dean (mostly written by Brian Wilson and recorded with the late Glen Campbell as the session guitarist).  Surf City is also the alter identity of the City of Huntington Beach.  The name has been long disputed between Huntington Beach and Santa Cruz even rising to a trademark lawsuit which provided content to plenty of opinion pieces in surfing publications and instilling boredom in many first year law school students during their property law courses.  Despite Santa Cruz being the neighbor to IJSBA's international headquarters, IJSBA firmly sides with Huntington as the true "Surf City."  Huntington Beach is also a city known for their love of motorsports and the folks there were kind enough to share their beach and show up, cheer us on, and take a real interest in our sport.  Huntington Beach, California: great location, great place, and the real Surf City!!! 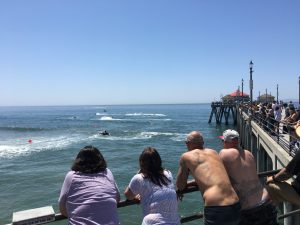 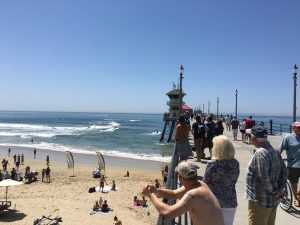 One of the greatest parts of attending this event was walking out on the pier which not only provided an excellent view of the race action but also allowed for the mingling and eavesdropping amongst the spectators.  Viewers seemed to remain fixed in the same position for hours at a time.  Standing near them, you could hear interest they loudly expressed about Personal Watercraft Racing.  Many spectators were openly discussing the different makes and models of watercraft and seemed well informed on what was going on out in the water. 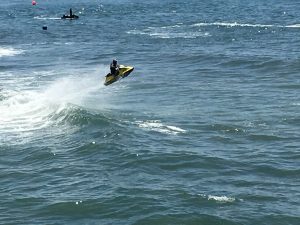 For a lot of us, the wave jumping 1996 Sea-Doo was the sight to behold.  22 years ago, this magnificent vessel crested the surf and rounded buoys as IJSBA Racing went mainstream.  This hard charging racer really took us back to another time in our life and it was wonderful to celebrate it.  In fact, the whole event was wonderful.  IJSBA will post, shortly, recaps and results as we receive them.