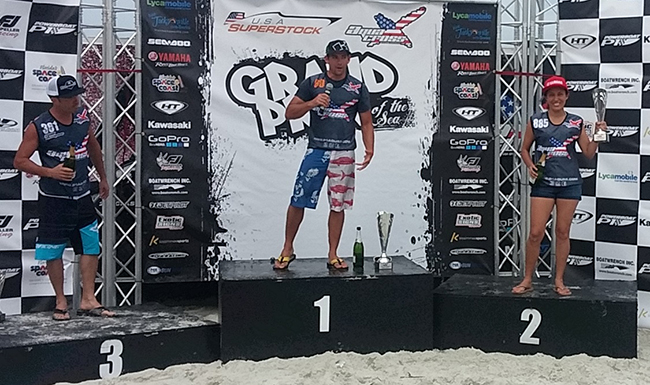 Peru is always proud of their athletes.  These seem to be very aggressive on showcasing Paloma Noceda.  IJSBA received this press release just minutes after tech was cleared.

The Peruvian Paloma Noceda returned back through the front door this 2015 with the second place in her debut in the Championship P1 AQUAX 250 BHP, which met this weekend's opening round of the season. The legendary Daytona Beach had complicated conditions. The strong wind reached more than 25 kilometers per hour, a sea moved with messy waves  became extremely dangerous to travel the circuit, but our queen won the obstacles of the watercraft with her wonderful performance.

"It was a race to not forget. I competed against the best riders in the world. Even facing a severe storm and the beginning of our two races today was delayed. The commission bailout did not give the order for the starts. I despited all difficulties and this result is very important for me, because it was our first run in this championship,” said Noceda.

On Saturday she took a third place in the race number one. On Sunday the results were good to the current World Champion 2014 IJSBA and climb to the podium in a well second place. The Daytona Grand Prix is ​​the first stop of the six scheduled for this tournament. Over thirty pilots from Asia, Europe, USA and of course from Peru gave a high level to this event for the quality of the rivals.

David Gorie ranked first, escorted by Paloma Noceda and third ended Eric Lagopoulos. On 6 and 7 June the second date will be in Jacksonville the second round.