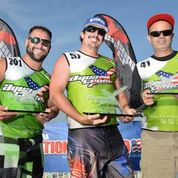 The IJSBA sanctioned P1 AquaX USA launched its season with a spectacular show of surf, sun and speed at Daytona Beach, Florida over the weekend.

Stuart Rasmussen, Eric Lagopoulos and Rob Greenwald top the opening table of the season after three hard races on high surf produced a dramatic start to the P1 AquaX USA Championship, where survival of the fittest was the name of the game.

Thirty seven riders lined up for the start of the first race of the season in Daytona Beach, Florida on Saturday, an impressive grid which has grown dramatically from the inaugural AquaX race in the USA last year. The series has attracted both pro riders and rookies who travelled from far and wide to attend an exciting weekend of jet ski racing. The racing was filmed for FOX channel’s Sun Sports and also streamed in a live, international broadcast on YouTube, a first for the fast- growing off shore race promoter Powerboat P1.

In the 300 Class Stuart Rasmussen (222), riding the new Kawasaki Ultra 310, headed the table at the end of the weekend having nailed the first race in sensational style on Saturday. The veteran Kawasaki racer showed the youngsters the way home almost a lap ahead of second and third placed riders Aero Aswar (199) and Gary Whittaker (345), both riding the new Yamaha SVHO. In Sunday’s racing, Rasmussen had to settle for 3rd and 2nd places, losing out to Eric Francis (911) who led from lap 2. “Consistent pace is what wins the race. Endurance and pacing is what gets results - you don’t win a race in a lap” commented Francis.

It was Troy Snyder (110) who picked up the hole shot to lead Sunday’s race, but it wasn’t for long as Eric Francis took the lead by lap 2 with Rasmussen in 3rd leading a dog eat dog battle through some tough surf conditions with Aero Aswar in 3rd place.

Current P1 AquaX UK champion Dave Huddleston (70) was in town to try his hand against the US AquaX racers.  Dave competed on a Sea-Doo RXPX260 having never ridden one before. Dave finished 9th overall at the end of the weekend and commented “I loved riding in the surf, it was amazing. It took all weekend to finally get the trim right on a new ski, meanwhile I was having some great battles with Anya Colley.”

Blaine Spooner (220) did well to finish 4th in all three races, the first home on a Sea-Doo RXPX-260 in the highly competitive 300 class.

Another regular UK competitor Anya Colley (52) impressed with a very gutsy performance in her US debut to finish 6th overall on the Kawasaki Ultra 300.

In the 250 Class Eric Lagopoulos (361) dominated the weekend with a hat-trick of wins on the Sea-Doo GTR. Ron Levy (88) showed the class he means business this season. As a Rookie racer last year Ron impressed, coming 2nd overall on his Yamaha FX SHO.

Tim McKercher (48) picked up a 2nd and two 3rd place finishes to earn 3rd overall in the 250 class on his Sea-Doo GTR, and Rookie racer Kyle McKrow (44) wowed the crowds by taking off and catching the biggest air of the weekend. McKrow landed safely to finish his race 4th overall in the 250 class and pick up the Rookie Cup award. This is a prize designed to encourage more Rookies to take up the sport. Points are accumulated based on the number of participants in a class.

In the 200 Class Ron Greenwald (57), a familiar face on the US jet ski racing scene, picked up the weekend class honors. Jason Maxson (201) was in 2nd place and Kelly Belval (41) in 3rd. Scott Reeves (970) actually won race 3 on the Sunday, and picked up 2nd in Race 2, but having retired from the opening race with mechanical issues he received no scores after failing to complete 70% of the race. This dropped him down to 5th overall at the end of the weekend.

P1 AquaX Ski Championship launched at Daytona Beach with five competitors taking to the high surf for three 15 minute races over the weekend. It was incredibly tough conditions for the stand up skiers and ended up being a true battle to stay on. Kirk Britto won the Inaugural weekend Ski Class Cup putting in the most consistent performance. Last year’s Pahokee winner Jeremy Schandelmayer was 2nd on his Kawasaki stand up.

Head of AquaX - Lisa Barsby commented ”I am delighted with the turn-out at the start of the 2014 USA season; it proves that we have a good formula. The conditions in Daytona are always pretty tough and this year has been no different. The start of each race looked pretty spectacular - like a herd of wildebeest charging for the first gate”

“It is also great to see Kawasaki not dominating the top spots in all the classes. The new Yamaha SVHO’s are proving very competitive and it is good to see a different manufacturer win each class. This has to be good for the sport and the industry.”

The P1 AquaX riders and skiers will be back in action in Jacksonville on 7/8 June - check in to www.p1aquaX.com to find out more. 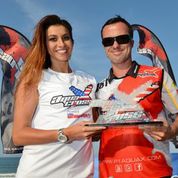 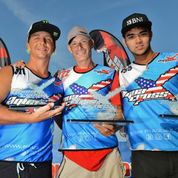 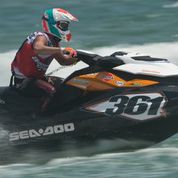 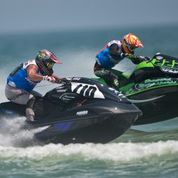 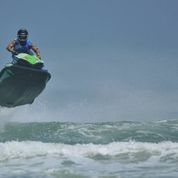 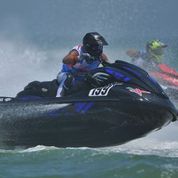