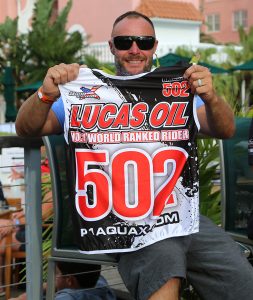 The third round of the P1 AquaX USA Championship in St. Pete Beach last month was the venue for the international personal watercraft promoter to announce the latest edition of the Lucas Oil P1 AquaX World Rankings, and there was cause for celebration among the American riders who now fill the top four places. The man with the biggest smile as he was presented with the No. 1 jersey by new World Rankings sponsor Lucas Oil was Brian Baldwin.

Launched in 2014, the P1 AquaX World Rankings identify the most consistent and talented P1 AquaX riders in the world and are revealed every three months. “They have become an established and valued part of our racing and we are delighted to welcome on board Lucas Oil as the new title sponsor” said Lisa Barsby, Global Head of P1 AquaX. “Over 250 riders have now made an appearance in the rankings and they have become a great talking point.”

Since it was founded 30 years ago Lucas Oil has recognised the power of sport, and sponsorships have played a key role in building the company. It is no stranger to marine motorsport having sponsored Nigel Hook and his SilverHook offshore powerboat racing team for 18 years, and is now expanding its presence by backing personal watercraft racing.

The rankings are calculated using two years’ worth of data, with race results from the last 12 months taking precedence over those recorded between 12 and 24 months ago, to ensure that riders in form and still racing in the series become the focus of the rankings. Factors that impact on the allocation of ranking points include where the rider finishes, the number of competitors, the water conditions, the level of race class and of the riders taking part. World Championship level events score double ranking points, and points from races more than two years old are removed as the season continues, ensuring an ever-changing landscape that allows new riders to make their mark after just a year or two of P1 AquaX racing.

Baldwin’s move to the top, which saw him don the No. 1 jersey for the first time, is the result of a strong finish last season and a solid start to his 2019 campaign. “It’s been my dream since I was a kid to race jet skis and now to be number 1 in the world racing against these guys who are awesome is just unbelievable” said a delighted Baldwin. He will be aiming to still be wearing the jersey in November when he defends his P1 AquaX world title at the Atlantis, Paradise Island resort in the Bahamas.

Indiana’s Christian Daly claimed the P1 AquaX Pro Rookie of the Year title last season and enters the Top 10 for the first time. Two British racers – multiple UK champion Phil Pope and the only Kawasaki rider amongst the ten names, Joe Harvey – give the Europeans something to cheer about. Pope competes in the United States, the UK and mainland Europe and moves up six places to re-enter the top flight in fifth place. The only Sea-Doo racer in the listing, Erminio Iantosca from Naples in Florida, has had a poor start to the current season and is the biggest faller, dropping six places to tenth. Flying the flag for France in sixth spot is Thomas Favolini, the reigning P1 AquaX Pro Enduro EuroTour champion.

The next edition of the World Rankings will be announced in September.