July 2-3 was an epic weekend in Sarasota FL, with the beaches lined with 85,000 plus people, beautiful weather and watercraft racing! The round benefited the Suncoast Charity for Children which helps support families with special needs children.  The Sarasota Grand Prix hosted the second round for the AquaX Pro Enduro and also rounded out the Championship round for the AquaX Amateur Enduro.
Chris Macclugage suffered some mechanical issues which took him out of both race 1 and 2. Aero Aswar capitalized on Maccs misfortune taking home the win for both races on Saturday. Aswar rode with blistering speed and managed to finish race 2 with almost a minute lead on the second place rider. Eric Francis fought his way through and managed to maintain his position in the top 3 on Saturday along with Mike Klippenstein and Brian Baldwin in the mix. 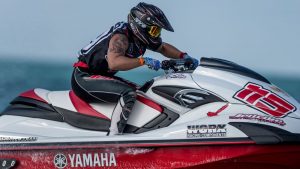 Sunday’s race saw Macc back in the race with a fixed Yamaha FX SVHO. He took the lead and kept the pace in front until a popped lanyard almost allowed Aero Aswar to pass.  Macc managed to restart his FX SVHO and keep his lead just ahead of young Aswar.
The AquaX Pro Class will continue its tour in Chicago along with the IJSBA National Closed Course Championships in September.
The AquaX Amateur Enduro finished out its South Eastern Championship with lots of racers scrambling for much needed points. #71 Chris Saxon maintained his winning pace and took home the top spot on the podium along with #714 Domenico Barilla and Enrique Chia rounding out the top 3.   The 300 Class Championship had a runaway winner in #71 Chris Saxon but the major battle was for 3rd place where #31 Hector Toledo and #255 Jeff Thornton were within a few points of each other.  Unfortunately for Toledo, his hull failed causing him to withdraw from race 3 which awarded Thornton the 3rd place spot in the overall Championship.
The 250 Enduro class was dominated all season by Tommy Olswang #219 as he did again in Sarasota.  Former AquaX 300 class Champion, Kevin Wassum returned to the AquaX course after a long hiatus and took home the 2nd place trophy with #571 Kevin Sullivan with the 3rd place win.  The overall Championship was won outright by Tommy Olswang, followed by #70 Eric Ruiz and #231 Alejandro Mora.
#927 Jennifer Nolan finish her series on top by being the only female to grace the AquaX podium in Sarasota as she took home the win in the 200 Class. #123 Eric Diaz brought home second with #128 Daniel steele rounding out the podium.  The overall Championship goes to #128 Daniel Steele with a consistent season.  Second place went to Chad Saxon who also raced a good season and Jennifer Nolan making her way onto the 3rd overall spot.

The AquaX Amatuer Enduro makes its way to the Great Lakes next for the Great Lakes series which kicks off August 6th and 7th in Whiting, IN followed by Chicago IL in Sept.
For more information on how you can get involved with AquaX USA please visit P1AquaX.com or contact Michelle Petro at Michelle.Petro@powerboatp1.com
P1 AquaX USA is sanctioned by the IJSBA .