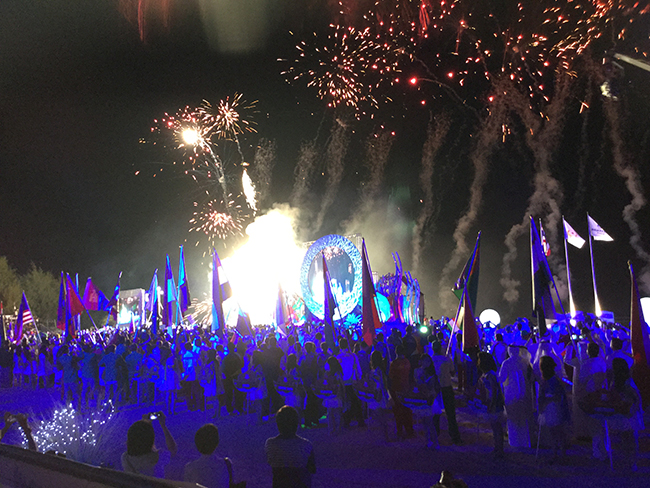 IJSBA is currently officiating at the Asian Beach Games in Phuket, Thailand.  Well, we will be officiating once the Jet-Ski Sport begins in a couple of days.  In the meantime, we are pleased to share a picture from the Opening Ceremonies.

The Opening Ceremonies were a very beautiful display of the camaraderie and international pride.  The productions that were put on coordinated performers and athletes along with some stunning visuals and pyrotechnics.  There seems to be no other organization that can open a competition quite like an Olympic Council.

Just prior to the Opening Ceremonies a rain storm blew through the park.  Fortunately, a seasoned worker in Thailand (Simon Rix) was experienced enough to know it was coming and we joined a group of other amateur weather forecasters in finding some temporary shelter.  Our refuge was in the food prep areas for the VIP tent.  The chefs were generous enough to let a crowd of people rush in and stand in every available inch of cover until the storm passed.  Upon leaving the prep area, on of our hosts noticed our credentials and asked why we didn’t go in the actal VIP tent for which we were authorized.  Embarrassed, we did indeed visit the area and found it to be a good suggestion.

Returning to the stadium, we witnessed numerous countries parading through the grounds with their flag and several team members.  Indonesia was represented by the Jet Ski Sport’s Aero Aswar.

IJSBA looks forward to bringing you news and information about the 2014 Asian Beach Games.