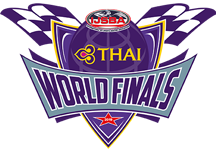 Well, we understand that Dawn Dawson cant make the 2019 World Finals because she lost a bet, or had to go work off un unpaid traffic ticket or something- we don't really like to pry, so we didn't ask.  Food TV personality, Andrew Zimmerman, recently made headlines for criticizing the quality of Chinese food in the Midwestern parts of the USA.  Dawn lives in the Midwest, maybe she needed to go off and test the statement by trying authentic food in China.  Again, it really isn't any of our business why Dawn would do something silly like skip a World Finals.  Former World Finals announcer, and long time PWC Racer, Mike Remar, rushed over to Dawn's house, packed her bags, drove her to the airport, and called IJSBA asking for the job.  You cant turn down that kind of enthusiasm and if you are going to have to fill a position for a great watercraft announcer like Dawn Dawson then you need to have a great announcer who also loves watercraft.  Mike Remar fits this bill and we were sure lucky he was available.  Please read the following statement on Mike Remar participating as a 2019 Thai Royal Airways World Finals announcer:

Mike Remar; former pro watercraft racer and long time announcer of extreme motor sports racing, is bringing his talents back to the IJSBA World Finals. Remar; as most veteran watercraft racers know him as, started his announcing career on the Region 6 race tour in the mid 90's and went on to announce the World Finals many times throughout the 90's and early 2000's. Since that time he has been focused on raising a family with his wife Susan and five children. During his time away from the World Finals he has kept active attending  and announcing many watercraft racing events around the country. He also stays on top of the racing action by monitoring what is happening through social media. He is very happy to be returning to the big show and working alongside Mike Young for this years 2019 Thai Airways World Finals. Mike Young & MIke Remar are a tremendous watercraft racing announcing team and we here at the IJSBA are excited to be reuniting them.