Hard work is the name of the game at the 2017 Hot Products Mark Hahn 300 Presented by Yamaha.  From planning, execution, and wrap up the organizers had their work cut out for them.  Participants didn’t get it any easier as the lake conditions were as grueling as it gets.  This didn’t stop the event from being anything short of a tremendous success.

A lot was going on at this event.  The Yamaha GP 1800 made its Endurance debut.  There were individual categories for two stroke powered Ski, and, of course, the 2017 Kawasaki SX-R made a worldwide competition debut post homologation.

This event, at many times, seems like it was destined for difficulty.  The city overbooked events leaving the Mark Hahn 300’s traditional date of the last weekend in February in a state where hotel rooms were scarce.  Potential reschedules kept hitting roadblocks as other events, which sought to avoid conflict with the popular watercraft race, already scooping up the available Saturdays in February.  Finally, the organization team decided on the 12th.

With February 12th not etched in stone, the weather conditions started to look ugly.  We aren’t talking surprise weather a few days before the race- we are talking about blistering conditions that surfaces well before the race got near and just never showed signs of ever letting up.  Stormy conditions have been pounding the Western United States all winter.  This is a good thing as we have been in a severe drought.  However, we would have preferred to have the rain in moderation.  What this come down to is that brutal wind, rain, and choppy conditions were predicted by nearly all weather reporting sources. 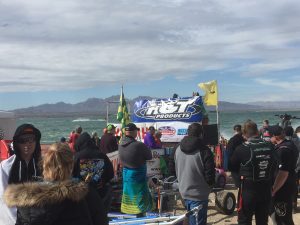 CREW MEMBERS AND SPECTATORS WAIT FOR THE CURRENT RACE LEADER

What competitors often don’t know is that serious financial commitments are made prior to the event and these commitments cannot be retracted.  Staff hotel rooms, travel budgets, hall rentals, and equipment moving expenses are all incurred well before the event starts.  If the event must be cancelled then those costs cannot be recouped.  This requires contingency plans to be made and, sometimes, the contingencies shift on the fly as the actual conditions change rapidly.  Fortunately, we did not get the horrible rain and 30 mile per hour winds that were initially predicted. 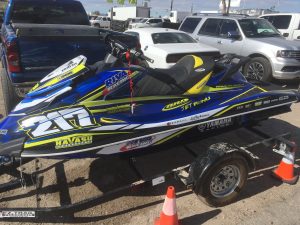 This doesn’t mean that the conditions were soft.  In fact, the conditions were still rough enough that the staff had debate on whether we could continue in the conditions that were present.   It was a sure thing that the call was a toss up.  All staff members, particularly the rescue marshals and the race director all were seasoned enough on this event to make the commitment to carry on and the caliber of the competitors that had showed up (several preregistered participants bowed out, in advance, citing the likelihood of poor weather conditions) appeared to be capable of handling the challenge. 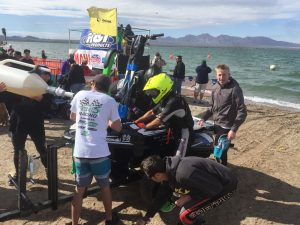 There isn’t anything else to say, at this point, other than the event ended up being amazing.  Nicholas Rius upon a new Yamaha GP 1800R ripped off of the shore holeshotting the start and carrying the lead through the first two laps.  In hot pursuit were the regular contenders: Pastorello, Warner, Heidler, Riabko, and other prepared racers who kept in close range the first two laps.  Sadly, mechanical demons possessed Rius’ PWC after lap 2.  Team Pastorello inherited the lead and simply never let it go.  A hard charging Craig Warner had a mishap during pitting which put his hull out of commission.  David Chassier and Jeremy Poret secured a well earned second place.  Rounding third overall was Christian D’Agostin and Mike Klippenstein. 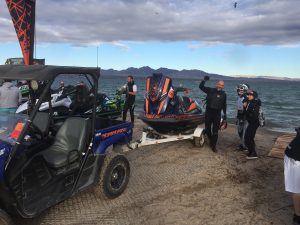 Athletes multitask at this event.  This is no less obvious than looking at Jean Baptiste Botti and Mike Klippenstein.  Botti was on both the overall winning Runabout team and the overall winning Ski Team.  Botti paired with Pastorello in Pro Am Runabout Four Stroke and with Raphael Maurin being an integral part of winning both categories.  Klippenstein did not podium in the Ski category which he challenged.  However, he did finish respectably on the Ski while participating in both Pro Am Runabout and Manufacturers Stock- which he won with Christian D’Agostin.  Second place in Four Stroke Ski was the combination of Emi Kanamori and Dustin Motzouris.  Third place went to 321 Kawasaki’s Luinstra team.  A surprising amount of the new 2017 SX-R showed up for this event. 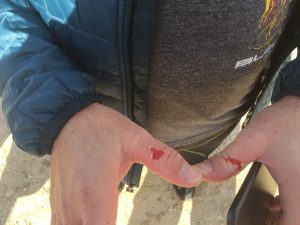 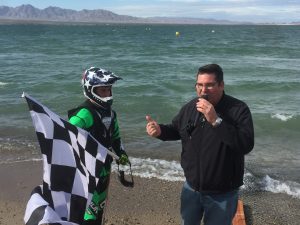 Overall results can be found here: 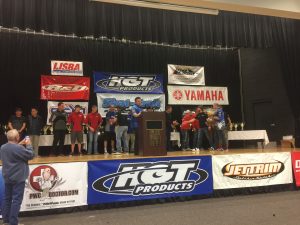 As we mentioned at the start of this post, hard work is the name of the game.  It takes an incredible amount of effort to plan and execute the event just as it does to compete in and complete the event.  Jim Russell and Ross Wallach ensure the run of show goes flawlessly.  Tom Perry, at Hot Products, canvasses support from his partners in the industry to provide the resources necessary for the event to meet the high level expectations.  The hardest working person here, hands down, is Mike Follmer.  Mike has had a passion for Endurance Racing ever since the first PWC ventured outside of the Closed Course.  He was a pioneer, at the outset, in this segment of competition.  When his friend Mark Hahn passed away, Mike was the first to step up to ensure that the Endurance community properly honored one of their own.  Mike makes the execution of this event seem easy and he keeps the bar set high so that none of the other organizers can be laxed in race promotions.  Just as much as the crowd waits in anticipation to see who is the leader of the first lap, the excitement for the curtains to draw and expose the annual trophies is one of the highlights of the competition.  The Mark Hahn 300 boasts some of the best trophies to be found anywhere. 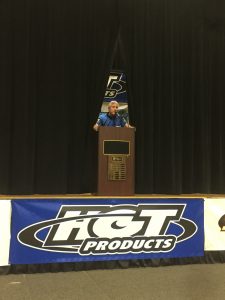 MIKE FOLLMER ADDRESSES THE CROWD BEFORE REVEALING THE TROPHIES

IJSBA congratulates all competitors and staff on an excellent event.  IJSBA will present more information on the 2018 Mark Hahn 300 when it is available.