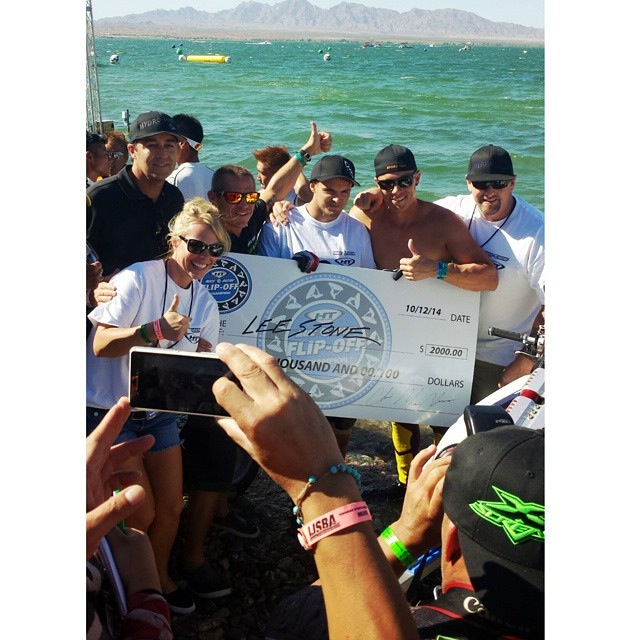 City of Lake Havasu, Arizona - Two industry powerhouses Macc Racing and Hydro Turf teamed up to bring to the Personal Watercraft community something to brag about! A Guinness Book of World Records opportunity for one hard charging and talented Professional Freestyler and a $2,000.00 Award Cash Prize! The event was held at the IJSBA World Finals, hosted by the City of Lake Havasu.

On October 12th, 2014, his first ever record setting feat was won by none other than Mr. Lee Stone.  Lee is a professional British athlete, who at the age of 23 has solidified himself in the history books.

Lee took the challenge, met the challenge, and exceeded the challenge with an unbelievable accounting of 36 consecutive back flips!  Do you have any idea what just happened? The crowd knew exactly what they were witnessing as one flip after another was counted off!

The Macc Racing/Hydro Turf Flip Off conquered the world!  Athletic prowess and PWC craft capability was front and center, and the focus was placed back on the sport of Personal Watercraft with this incredible World Record.

We now have an official international standing that has set the bar for others to practice all year round, wherever they are to come back one year later in 2015 and best the '36'.  Lee also created a new maneuver he calls the Indian Air and Heel Clicker. The challenge was set that a minimum of 20 back flips had to be exceeded; this was derived from the Guinness formal requirements.

Daniel Martin was last year's record holder and was set to best his own feat of 24 consecutive back flips.  The water conditions were exceptionally rough and choppy in Havasu during the Flip Off competition.  Martin who hails from Texas completed 26 backflips before Stone took to the water. Lee Stone did not look back, accomplishing 2 feats in one setting, he brought the 2014 World Championship for Freestyle to his pedigree and now has his name written in the history books with a double dip Guinness Flip Off Record.

Next year shall be something to watch as hopeful talent from across the globe begins practicing solely to best this feat!  The record was completed on Lake Havasu at the Crazy Horse Campgrounds main beach.