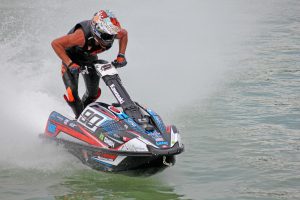 It has been a long time since we received a Kevin Reiterer report. Here is the latest from Austria's hometown hero.

The past weekend 120 racers from 26 nations competed at the IJSBA Euro Finals in Austria. While the Formula 1 had its stop in Spielberg, the fastest racers on the water paddled it out in Pöchlarn. The 24 year old Austrian was a contender for the title but after a bad start into the season he was shaddowed by Quinten Bossche (BEL) and Valentin Dardillart (FRA). "After the season openers, where I had a hard time catching up with the top five at the World Cup I went back home and trained every day. I stepped back from the training off the water and used all my time on the ski to become one with the ski. It was going good but you never know how fast you really are until you match yourself with the best.", says Reiterer. Reiterer hit the track on his JUST Technik Design Kawasaki SX-R 1500 in the two strongest stand up categories. Conclussion: two tiles. After a great comeback in the first moto and a second place finish Reiterer went on to win the next three motos in front of Quinten Bossche (BEL) and Valentin Dardillart (FRA).

"We are flying through the world, we are little stars in Asia and in the US, but having the chance to race at home in front of your hometown fans, your family and friends, who supported you from day one and made you believe that you can fullfill your dream is a big win. I have to give a big thanks to all my sponsors, my team and my supporters. It wouldn't be possible without them."