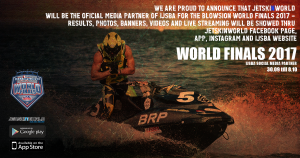 IJSBA is very pleased to announce that JETSKINWORLD has signed as the official media partner of the 2017 Blowsion World Finals.  JETSKINWORLD will handle event publicity, live streaming, daily clips, archives, and app feeds.  JETSKINWORLD has been a long time media associate with IJSBA and has covered major events including Martinique Jettrace, Endurance World Championships, and are the official media for the 2017 Endurance in Morocco.  Sign in to Google Play or Apple Store to get the JETSKIINWORLD app.  See you in Havasu or see us in Havasu from where you are thanks to JETSKINWORLD.