Wind, clouds, and scattered rain did nothing to cool the enthusiasm of a beach full of participants gathered in Pattaya, Thailand, for the first official day of the Thai Jet Sports Boating Association’s 2015 King’s Cup. 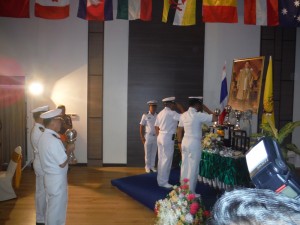 It is doubtful that many readers of an IJSBA press releases are unaware of the King’s Cup (especially since Jettribe beat us to a press release).  However, it is our job to raise awareness, so, here is a little primer on the King’s Cup.  Thailand has a king who is well loved and revered by the Thai citizens.  In one of his many displays of love for his country, The King donates precious metals which are formed into some of the most beautiful and highly chased trophies in the entire sport of PWC Racing.  These trophies are, predictably, King’s Cups.  King’s Cups are given to the winners of just a few premiere classes: Pro Ski, Pro Open, Pro Sport, Pro 800, and Freestyle.  Podium finishers also receive some pretty impressive payouts.

Amazing trophies and payouts are certainly magnets for PWC Racers but those features are just the tip of the iceberg for everything great about the King’s Cup.  Starting with a picturesque location, Pattaya Beach, the back drop of the race course boasts scattered islands over the horizon of a blue sea, in a warm and comfortable tropical environment.  As if this isn’t enough to get by, the event is staffed by a very experienced group of people that have spent decades managing watercraft events all over the world so that things run smoothly.  All this is packaged in the legendary hospitality of Thai people  which is palpable everywhere at the venue and the surrounding town.  The King’s Cup is a truly special experience.

The first day of the event is comprised of safety inspections, a riders’ meeting, and an opening ceremony.  The opening ceremony is always exciting, TJSBA hosts a banquet with various types of entertainment. This year, the stage was filled with traditional Thai cultural dancing.  Tables were filled with particpants and crew from nearly 40 countries!  Below are some pictures from Day 1.  More information will be released as it becomes available.