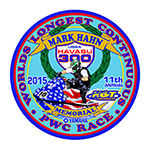 The word going around the pits, at the close of the 2015 Mark Hahn 300 Memorial Presented by Yamaha, was that this year’s event was the best one yet.  This year marked the 11th installment of the largest single day endurance race on the planet and this is a competition that only improves with age.  Hundreds of crew members and spectators converged upon Crazy Horse Campgrounds to support more than 110 individual racers who participated as a team or as an individual “Ironman.”

The Mark Hahn 300 Memorial recognizes Mark Hahn, as you might imagine, who was one of Endurance Racing’s most prolific and dedicated competitors.  Mark succumbed to a heart attack, in 2004, while competing.  Mark died doing what he loved and giving his passion 110%.  The event was developed as a means of making the world’s most extreme endurance race a tribute to the one of the world’s most intense racers.  The Mark Hahn 300 sends racers (well, at least one racer) on a 300 mile competition challenging the limits of both man and machine.

Many factors contributed to this event being a tremendous success.  A surprise turn in weather in the second half of the day completely turned the race upside down and dramatically changed the results.  While this did not spell success for the early leaders, it made for good racing and a cliffhanger final lap that kept people excited.  Participation noticeably increased from 2014 which made for more a more exciting show and greater levels of interaction on the beach. New technologies were showcased and amazing top speeds were reached even in less than ideal conditions.

Attrition is always a factor at any endurance race.  There were 17 watercraft towed in 2014 out of a field of 57 starting watercraft.  This means that there is an equipment failure rate of 30%.  This year, there were 10 tows out of a starting count of 63 watercraft which cuts the failure rate nearly in half.  This is little consolation, though, to those whose hopes were squashed by an uncooperative watercraft.

When you have field of an Aswar, a Warner, a MacClugage, a Botti, Motzouris, a Klippenstein, and a Pastorello all on the line, all with very good equipment, then you know that the competition is fierce.  How the winners, in a field like this, are decided as much by strategy as by athleticism because competitiveness and machine quality are all very close.  At this particular race, the outcome may have been determined by an outright gamble.

The gamblers were the team of Yury Riabko and Peter DeSmet and Jean Bruno Pastorello and Jean Baptiste Botti in Runabout Open.  Heavy winds, and even sometimes rain, were forecast for the event all the way up until the night before the race.  All of a sudden, come race day, the weather was sunny with not even a noticeable breeze.  This is where two players made very different wagers.  Riabko/DeSmet opted to set up for flat water gambling that the bulk of the say would stay flat.  Pastorello/Botti stuck with their original plans for a rough water configuration.  Riabko/DeSmet appeared to have made the better wager as Yury instantly catapulted to the lead at the start of the event.  What started as a lead then blossomed into being in his own race as he was lapping standups before the end of the second lap.  At the first pit stop, Yury came in, the team fueled, and Peter DeSmet headed back out of sight long before the second place rider arrived at the checkered flag section.  This performance further evolved into a lead of more than six minutes over second place.  A frustrated Jean Bruno Pastorello openly remarked “where is all the wind???”

Pastorello’s plea to the weather gods was heard as the wind soon started kick up.  Riders coming in for their pits were describing the water conditions after turn three as the worse they had ever experienced.  The lead times of team Riabko/DeSmet started to narrow.  Eventually, the combination of blisteringly high horsepower and extremely rough conditions ejected one of the riders from the Russian and Belgian coalition and the French team took first place.  A valiant effort to retake the lead ensued until the 28th lap where, similar to Greek mythology, the fiberglass god was cousin to the weather god with both having the same objective to ensure a win for France.  The hull of the challenging watercraft delaminated leaving Riabko sinking on the final approach.

What was a disappointment for one team was a victory for another.  Botti and Pastorello celebrated a checkered flag with a very happy pit crew.  Other persons enjoying top accolades included Mike Klippenstein who earned a second place overall finish and the first place iron man.  Tony Beck and Chris Fischetti won the Manufacturers Stock Class with Mike Perry closely behind.  The Four Stroke  Stock Class was won by the team of Christophe Girello and Fabrice Granger.  Aqsa Aswar followed to a second place finish in the class.  Ski class was fiercely contested and won by Kody Kopenhaver and Bibi Carmouche with the team Bill Haig, Steve Haig, and Gina Carlo finishing a close second.  Brock Austin won Ironman Ski.  Jared Moore and Mark Conroy won the Runabout Normally Aspirated Class (this was erroneously reported earlier as Steve Webster and Mark Conroy).

Shawn Alladio, in conjunction with the Phoenix Patriot Foundation, brought the Never Quit Challenge to the event.  The Never Quit Challenge helps wounded veterans calibrate back to a normal life after sustaining serious combat injuries.  Seven teams were part of the Never Quit Challenge along with a full platoon of pit crew.  The remarkable effort brought to the event is deserving of more than a paragraph in a recap.  IJSBA will bring you a separate story this week.  In the meantime, we recognize Christopher Livesay, Anthony Radetic, Kyle Blackwell, Johnny Utah, Marc Esposito, Justin Retzer, Michael Retzer, Jaron Bing, Tracy Cazee, Michael Morse, and Kyle Butcher for their display of sportsmanship on the water.

All in all, an excellent Mark Hahn 300.  However, Mike Follmer and crew would never let it be anything less.  IJSBA will surely post more recaps and other notices from participants.  We will see you all next year for the 12th annual Mark Hahn Memorial 300.  Thanks to Hot Products and Yamaha for the headlining support!