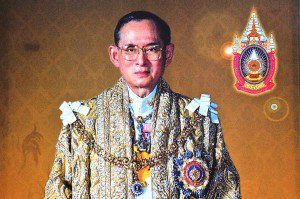 Bhumibol Adulyadej, the King of Thailand, has passed away.  Today, an entire nation of people mourn the loss of a beloved leader and, for the first time, contemplate a reality where the nucleus of their cultural identity will forever change.

IJSBA, and the rest of the Personal Watercraft Racing Community also join in mourning.  King Bhumibol Adulyadej has a legacy permanently ingrained into IJSBA's identity.

In researching information to share in IJSBA's eulogy, this article was found:  http://www.bangkokpost.com/news/sports/1109724/king-of-sports-mourned.  Reading the referenced article provided the focus for this posting on our experience with the Thai King and reflecting upon what our own community has lost in his passing.

While Thailand's monarch supported numerous sporting events, his personal interest in watersports is notable.  He, and is daughter, Princess Ubolratana, won the OK Dinghy category, one year, at the SEA Games.  It is not surprise that one of the most recognized PWC events in the world bears his name.  King Bhumibol understood that strong exhibitions on both supporting success and sportsmanship reflected positively on the nation of the athletes who exhibited these traits.  Thai athletes were often supported directly, by The King, but his affinity for the water is where we find ourselves most familiar with his passion and generosity.

Thai athletes, at the annual World Finals, have long been acknowledged as the most fiercely competitive and successful.  The rise in Thai attention, at the annual world championships, coincides with the rise in notoriety and prestige of the annual invitational: Thailand's King's Cup Jet Ski World Cup.  The Thai Jet Sports Boating Association, in conjunction with Asian Multi Sports Limited, with the King's support, took this event from a concept to the definitive invitational event in the sport.  Today, all of the top athletes, in PWC Racing, make it a point to regularly attend the King's Cup for some of the best racing seen anywhere.

Great racing aside, the real spotlight of the event is the Thai hospitality which includes entertainment, a gourmet dinner, and culminates in the actual King's Cups.  The King's Cup is not just a name, magnificent trophies are ushered into the opening ceremony by military guard.  These trophies are made from precious metals personally donated by His Royal Highness.  No matter how many times you have seen it, the bringing in of the trophies and salute to the King has been a very emotional experience and has brought a dignity to the sport that is very powerful.  Athletes who win a King's Cup often declare it to be one of the most cherished trophies earned.

Princess Ubolratana, mentioned above,  has many times attended the King's Cup.  Her presence further brings our connection with King Bhumibol much more personal than him simply being a benefactor to a great PWC Race.  He took interest in our sport, wanted to share Thailand with PWC Racers and had the goal of bringing PWC Racers to Thailand.  The King accomplished both with excellence.  We offer our condolences to the Royal Family and will forever remember his wonderful relationship with IJSBA and PWC Racing.