IJSBA Celebrates World Champion And Competitors Of Pro Am 1100 Stock 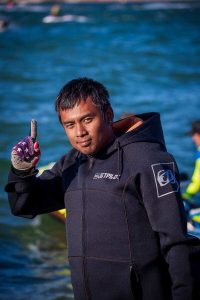 With the 2019 Thai Royal Airways World Finals having concluded, IJSBA would like to put the spotlight on the Pro Am 1100 Runabout Stock category which was one of the most fiercely challenged and fastest growing division of IJSBA competition. Regretfully, at the awards ceremony, the prize recipients were not recognized or called to the stage*

This competition division highlights the true international nature of the World Finals with the podium consisting of athletes entirely from the Asian Region. Winner, and World Champion, Attapon Kunsa (featured in the photo), took home the top honor back to Thailand delivering further accolades to the Thai based title sponsor with two perfect first place finishes.  Another Thai Rider, Permpon Teerapatpanich, gave Attapon a strong challenge ending both motos with two solid second place finishes.  Long time favorite, BJ Ang kept up the pattern with two consecutive third place finishes to round out the overall top three.  A field of Florida riders kept the racing intense with other hard chargers from Spain and France.  IJSBA looks forward to the 2020 retrying of this competition.

*IJSBA will make a separate posting about the nature of these circumstances.  They are not included here as to not distract from the attention and respect owed to these competitors.