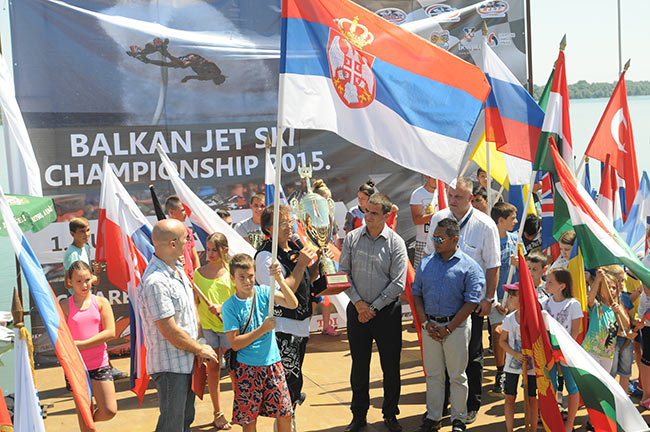 IJSBA has received the following release from the Jet Ski Association Of Serbia, the principal organizer of the Balkan Jet Ski Championship:

As we already announce, August was start in sign of jet ski races in Serbia.

Many racers from the Balkan countries was supported with Ukrainian Aquabike Federation members, that was driving 2000 km to compete in Runabout and Ski category. And as it goes in jet ski competition, it was unable to compete in one category, because of the engine broke at the training.

For this occasion, Jet Ski Association of Serbia was hired international judges from Hungary, so whole event was moved into the higher level.
As a part of the competition and already a traditional program of Balkan Jet Ski Championship, was the participation of four racers that was took a place at the Para Jet Ski race – two from Hungary and two from Serbia.

Night was reserved for Flyboard show and Ali Komsusu from Turkey. Again, he was delight the numerous Serbian audience that has chance for the first time to enjoy in his acrobations in the night and in a special designed suit with the led lamps. The whole scene was phenomenal and national Serbian TV station (RTS) was doing the live broadcasting.

It was very exciting to watch how competitors are changing their positions in front of many observers on a different jet ski brands. But, more interesting were the scenes from the start in Kawasaki category, when identical boats start and where dominate experience and knowledge of the pilots.

Cesare Vismara Memorial race was organized at the end of the racing day and at the joy of the President of Jet Ski Association of Serbia – Veljko Sukalo, trophy for the 1st place was awarded to the Serbian young pilot Igor Perazic.

Jet Ski Association of Serbia would like to thanks to all those who was the part of this year competition and who gave tribute to our too early gone team member - Cesare Vismara, especially to the Serbian Ministry of Youth and Sport.