IJSBA Back Online- Kind Of An Update (But Not Really)

IJSBA has been offline, frequently, ever since we have returned from our contract signing in Mexico.  It is frustrating to be headquartered in the technology capital of the world (San Francisco Bay Area) and lose internet.  However, the outages in Half Moon Bay were due to these crazy intense storms that have been pounding the Western portion of the United States.  These storms have also ended the long drought we have had in California and the accompanying region.  This means full lakes and more places to ride and race once again.

So, this is kind of the January Update, but not really because we have bigger news to share next week.  We mostly wanted to show you the weather conditions at IJSBA Headquarters, check out these pictures (The IJSBA office is on the second floor by the way): 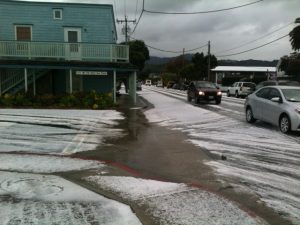 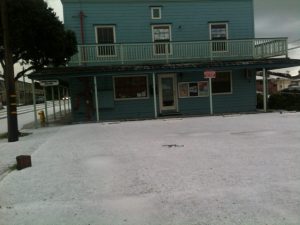 Those are snow like conditions at sea level in California!!  They also knocked out the internet for more than twelve hours in just one day.

Speaking of California, this week is the anniversary of the Gold Rush.  In 1848, a shiny discovery at Sutter's Mill brought fortune hunters, from all over the world, to the region.  We will spare you the corny allegory we were going to make of the new Kawasaki SX-R bringing new stand ups back to California, and the and the Gold Rush way it will bring riches tot he sport and get straight to the point:  We still expect the new SX-R to homologate the first week of February.  We feel safe in telling you that those of you who get your hands on one and want to bring it to the 2017 Hot Products Mark Hahn Presented by Yamaha should be able to race it.  Remember, that Ski PWC, with aftermarket hulls, cannot be longer than 97 inches.  In fact, the only thing that can be longer than 97 inches is the new SX-R and the new SX-R must maintain the OEM hull.

This year's Mark Hahn is expected to be very exciting due to the fact that the SX-R is expected to compete, there is a separate Ski Class for two stroke Ski, and riders on fairly matched runabouts, from all three manufacturers, all have new strategies to take the home the overall.  The fact that rescheduling needs put this event on an alternative date, and a Sunday, means that the lake should have less traffic and competitors will be able to focus more on straight lines and speeds (IJSBA Legal Department says: this is not a suggestion to pay less attention to boat traffic).  Competitors are already signed up from France, Uruguay, Portugal, and Japan to challenge USA competitors from several states.  It is hard to find a person who puts more behind a production than Mike Follmer and the trophies earned at this grueling event are to be envied.

On Saturday afternoon/early evening, IJSBA will be holding an meeting to casually discuss the evolution of the speed control measures that we plan to implement.  This meeting will only involve the Ski Classes and this will not be a meeting where any rule will be passed.  Finalizing technical rules requires the approval of Tech Director Mike Rodgers and must be ratified by the IJSBA Board of Directors.  But, what we expect to have is a constructive discussion that sets goals of safety and sustainability in the Ski classes without unduly stifling innovation.  Watch for instructions to attend over the next week.

After Mark Hahn, PWC will be loaded up for Karujet.  Just as sore muscles and aching joints are recovering from the world's longest PWC Race, many will be competing for the single rider Offshore World Championship on the Island of Guadelupe at the Karujet competition.  Karujet is intense.  Eric Paulin has been organizing this race for years and the racing is absolutely intense as the competitors take different stages around the island to unknown water conditions.  The event program can be found here:  http://www.karujet.com/karujet-2017-program-and-news/.  IJSBA will start posting regular releases as the arrive.  Karujet is offering special packages for first time competitors.

There is going to be a lot of Endurance Racing this year.  Mark Hahn and the Karujet Offshore World Championship just get things started.  Soon after, Martinique will hold the first round of the World Endurance Championships that tests teams rather than individual riders.  The second round is in Morocco (after World Finals).  Before then, RPM racing will operate their annual endurance series, P1 Aqua X will have fiercely contested events, the INKA Jet Raid will send several excited teams down the Coast of Peru.  Mexico has joined the action.  Endurance Sprint championships will take place at the IJSBA European Finals in Austria as well as at World Finals.  The annual King's Cup World Cup in Pattaya, Thailand, should also feature an endurance class again this year.  So, start your cardio now, do plenty of stretching, and order  your drums of VP Fuel because this is the year for Endurance Racing to really make a statement!!!

IJSBA is reminding the public of the conversions of the 800 classes to 1100 classes.  Really, this is nothing new, we have had this formula for more than a decade- where does the time go?  Anyway, the original chart is posted here:  https://ijsba.com/ijsba/rulebook/2009/4stroke_chart.pdf.  We are still running, basically, the same format except for a couple modifications.  This is plan.  Rec Lites remains unchanged and the only PWC currently produced that is eligible for Rec Lites is the Sea-Doo Spark line.  IJSBA will be offering 1100 Stock, 1100 Limited, and 1100 Superstock.  1100 Stock will be open to Four Strokes only.  1100 Limited and 1100 Superstock are open to both Two and Four Stroke powered PWC.  Two Strokes will be allowed maximum displacements of 800cc.   In the 1100 Superstock Class, only Four Stroke powered PWC will be allowed to add forced induction technology.  If this still is not a clear formula, please email info@ijsba.com.

We are still spending the bulk of every day taking emails and calls regarding what is going to be the evolution of the Ski Class.  We just are not ready to make a final outline yet but, as it turns out, neither are you.  Many of the folks offering their opinions are having their viewpoint evolve the more they work through the ideas and the possibilities.  We think this is just fine and that is why we are taking our time.  The concept seems clear, Two Strokes and Four Strokes will generally be separated, eventually, where some may meet in some general classes.  For Four Stroke Ski we see only two levels of modification: Stock and a restricted Mod class with little in between.  For Two Stroke we see Lites, Mod, and a class in the middle that will replace Limited.  This is the framework we introduced at the 2016 World Finals and it still seems to be the best to carry us forward.  We have to make some decisions soon.  However, there is a Congress of the Rules session at this year's World Finals and we do want to have a finalized format decided, by the community, at that time.

This concludes this short update.  Stay tuned for another one soon.