This just in from Hot Products regarding their end of the year news and their plans for the very popular 2017 Mark Hahn 300 event. 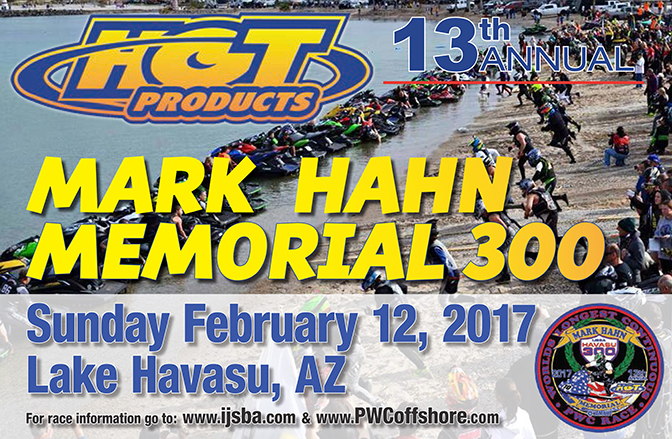 The 13th Annual "World's Longest Continuous PWC Race" was announced today by the event promoter Jim Russell, DSM Events LLC the event promoter, and Executive producer Mike Follmer. The 2017 Hot Products IJSBA Mark Hahn Memorial Havasu 300 Mile National Team Endurance Race Presented by YAMAHA is all set to launch on Sunday February 12, 2017 from Crazy Horse Campground in Lake Havasu City, Arizona. The 2016 event attracted teams and riders from 14 Countries around the world and will once again be sanctioned by the International Jet Sports Boating Association (IJSBA), and it is expected to draw a new record number teams from around the globe as well as all of the top PWC racers from the USA.

For the thirteenth consecutive year the race is being held again in the memory of endurance racer Mark Hahn who was instrumental in providing the momentum to keep endurance racing going strong and growing across the country before his untimely death during a PWC race in 2004. The "Team" format features two riders for runabout (sit down) boat teams and up to three.

All prize fund amounts will be announced at the riders meeting the morning of the event.

NEW STANDUP CLASSES FOR 2017:
These new class structures were created using input from the IJSBA, racers and the new 2017 Kawasaki SX-R ski release.

*Based on the new classes the Hot Products Cup award for the overall standup time has been withdrawn and will be announced at the riders meeting the morning of the event.

Four Stroke Mod Standup
(No two stroke skis allowed)
The maximum displacement for Four Stroke Skis with normally aspirated Four Stroke engines is 1500 CC. The maximum displacement for Four Stroke Skis equipped with supercharger or turbocharger is 900CC.
The 2017 Kawasaki SX-R is legal for this race class.
All aftermarket IJSBA legal hulls allowed, the 2017 SX-R must use the OEM stock hull.
Aftermarket fuel cells/tanks are allowed (tanks must be vented per Coast Guard regulations)
*all tanks must be approved by racer director
Fueling rule see below

Sportsman 2 Stroke Standup
(No four stroke skis or aftermarket hulls allowed)
The goal of this class is to be a fair, economical, competitive and fun racing class
OEM Stand up PWC hulls only, no aftermarket hulls
Must use the OEM crankcase and OEM cylinder
Fuel lines and vent must be OEM configuration/size (no additional vents or oversized fuel lines allowed)
No turbos or superchargers allowed
The maximum displacement is 850 CC
Fueling rule see below

There will be a requirement of 5 entries by January 13th for the class to be raced as outlined, if less than 5 the classes will be combined, we will email the entries if the class is going to be combined and the racer will be allowed to withdraw if they do not want to race in the merged class.

2017 STAND UP FUELING RULE FOR ALL CLASSES
Drybreak systems are permitted, however, the system must comply with current safety standards and must be approved during inspection prior to the race. Fueling must be done with Coast Guard approved fueling jugs/containers. No electric fuel pumps, towers, pressurized fueling systems are permitted. Gravity fed and or hand held fuel jugs are the only fueling sources permitted.
If you have any question in regards to this new fueling rule you must contact
Ross Wallach
email: rossdbos26@yahoo.com

Christmas Holiday
Friday 12.23.16 the office will close at 2pm

Hot Products will be closed the entire following week
Monday 12.26.16 thru Friday 12.30.16 in celebration of Christmas