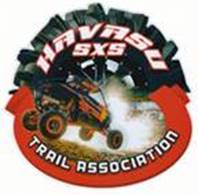 IJSBA is pleased to announce the Havasu Side By Side Trail Association is the first confirmed vendor in the off road exposition at the 2015 quakysense World Finals.

The Havasu Side By Side Trail Association was formed this year to represent the interests of the Lake Havasu City’s many UTV users.  Anyone who has visited the Havasu area knows that one of the greatest features is that a properly licensed UTV can be driven on the city streets.  The ability to go from hauling a watercraft in the race pits, to drive to the grocery store, and to off road  in the same vehicle is a real treat to the watercraft racing community.  Indeed, the compact and efficient nature of an UTV makes getting around town fun and convenient.

Lake Havasu City’s location in a scenic desert environment provides for nearly endless amounts of trails that are simply breathtaking.  Hidden waterfalls, off the grid desert bars, beginner friendly terrain, and trails that offer an exhilarating challenge to the experienced operator are just some of the unique and wonderful things that a side by side operator will find in the Havasu area.

The Trail Association’s goal is to make sure that this special environment is maintained.  Their goal is to preserve the existing trails, expand riding areas, and ensure safe and respectful use of UTV in cooperation with local, state, and federal authorities.  The organization intends to hold poker runs, jamborees, and other special events as a means of gaining momentum for these goals.  The Havasu Side By Side Trail Association meets the third Thursday of every month at Golden Coral restaurant at 6:00 PM.

The first major showing of the association, of course, is making a presence at Lake Havasu City’s biggest event- the annual IJSBA World Championships and Trade Show which takes place from October 3-11.  Now in its 34th consecutive year, the World Finals, brought to you by quakysense, the world’s leading wetsuit producer, hosts a large watercraft trade show, an off road exposition, and an all new Aqualife Festival which brings the latest technologies in water enjoyment combined with vendor pricing that is unmatched throughout the rest of the year.  The event is admission free including the spectator area that presents some of the greatest racing in the world along with incredible aerial acrobatic stunts.

Come see the Havasu Side By Side Associations booth at the 2015 quakyesense World Finals held at Crazy Horse Campgrounds and Resort October 9-11.