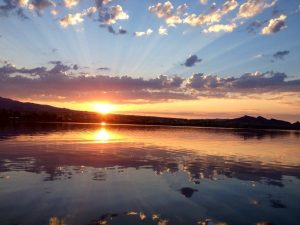 Summer is officially over, according to the sun.  According to the Personal Watercraft Racing Community, summer is not over until World Finals Pro Weekend has concluded.  Summer, not withstanding, today marks the rapid decline of the amount of sunshine in a day.  The sun setting over Lake Havasu is one of the most majestic sights a PWC Racer will ever see, second only to a championship heralding checkered flag being waived over the same said lake.  IJSBA would like to wish all of the World Finals competitors, attendees, and fans a very happy Autumn Equinox.

This picture was taken by Holly M. and was borrowed from https://wateruseitwisely.com/lakehavasu/.