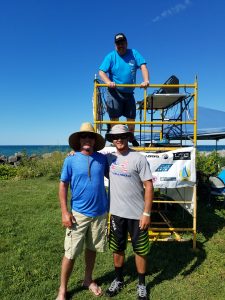 Look who showed up at the IJSBA event in Whitting, Indiana: 2016 Hall of Fame inductee Jacque Bryant and his son John.

Amy Green, organizer of the event, kindly invited the Bryant family over to the venue as it was in Jacque's backyard.  John Bryant, Jacque's son and former champion, himself, jumped on a Ski and earned a 2nd, overall, for the weekend.

Jacque Bryant a veteran IJSBA Racer and champion, a father of three, and one of the most recognized race directors in the history of World Finals.  The family plans to next hit the IJSBA US National Championship in Chicahgo and then World Finals where John will race and Jacque will received his Hall of Fame award on October 8th.