There seems to be no limit to what Franky Zapata can do.  His new company slogan, "Never Stop Dreaming" sums up well Franky's continued ambitions and accomplishments.   A real flying hoverboard ha been the subject of the dream of just about every person on this planet at one time or another.  IJSBA is proud to be part of Franky's legacy that has brought the Flyboard Air to life.  Franky, and the crew, will show this exciting new invention at the 2016 quakysense World Finals.

Here is the official press release about his new product, the Flyboard Air:

Le Rove, May 2016 -  Franky Zapata has set a new a new Guinness World Records title for the farthest hoverboard flight during a spectacular attempt off the coast of Sausset-les-Pins this Saturday 30th of April.  After his first test run, that was featured in the now viral video earlier this month, the former jetski champion managed a new benchmark distance of 2,252 meters (7,388 feet), smashing the previous record of 275.9 meters (905 feet, 2 inches), set by Canadian inventor Catalin Alexandru Duru.

A scream from the jets and he was skirting the coastline for about 6 or 7 minutes, flying roughly 30 meters (100 feet) above the water and reaching a top speed of around 70 km/h (44 mph), before heading into the port of Sausset-les-Pins to land safely.
The French jet ski champion Franky, 37, piloted a futuristic aircraft called the Flyboard Air developed by his company Zapata Racing. 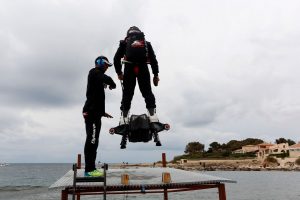 About Zapata Racing : Founded by the former Jetski champion Franky Zapata, the company is specialized in flying innovations : Flyboard® Pro Series, Hoverboard by ZR® and Jetpack by ZR® are the water propelled devices that made the firm’s fame. It has since become a sport that has its own international competitions that bring together the best international riders. With its new innovation, Flyboard® Air, Zapata Racing aims to keep its own « Never Stop Dreaming » motto alive. Explore the ZR universe and its safe & fun products, approved by millions of users worldwide: www.zapata-racing.com