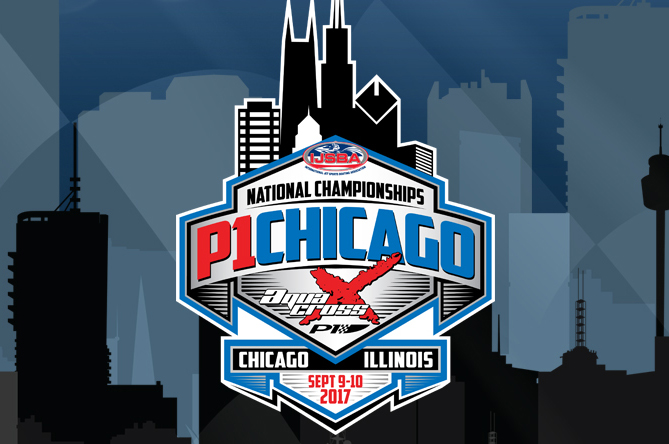 The Windy City welcomes the world's top riders to compete in the Great Lakes Series' second round! The riders hit Lake Michigan for a race weekend of serious non-stop, adrenaline fuelled, heart pumping, jaw dropping race action to prove who's the best in the business.

While you're in the neighborhood, why not indulge yourself in a famous deep pan pizza, the world's best museums and architecture that awes. With festivals every weekend, live music every night, and beautiful parks and trails beckoning every day — Chicago buzzes with energy and excitement all season.

The famous Chicago skyline and cultural offerings are second to none, and with beaches ever present along the city's lakefront there is plenty to keep you busy.

This is a city built on the shores of greatness. Home to the world famous Chicago Bulls and rich in sporting history, Chicago is made for champions. Let's see who has the guts to claim one of the biggest prizes in motorsport.

Prepare yourselves for one helluva show! Are you ready?

What is P1 AquaX?

The series was launched in the UK by London based sports promoter Powerboat P1 and grew quickly by attracting a mix of first-time and experienced racers to a new style of racing. In 2013, P1 rolled out a second series in the USA and such was the interest that the original format needed reviewing to cope with the abundance of new racers. By the end of 2015, the series had received over 400 registered entries from 11 countries.

2016 was undoubtably a year of extensive growth for AquaX with the unveiling of a Pro level championship in the USA and the launch of two further Pro/Am championships in Malaysia and the Great Lakes region of the USA.This year and with acquisition of leading european sprint series, Jetcross, and the launch of the European AquaX Pro Championships shows P1 is committed to delivering this exciting sport to a worldwide audience for years to come.

The free, two-day event features professional and amateur competitions, as the world’s best racers vie for valuable points ahead of the AquaX World Championships, held in December in Key West, Fl.

“Our exhilarating international jet ski race series crowns the fastest talent in the world and we are thrilled to bring this competition to Chicago,” said P1 AquaX Managing Director, Azam Rangoonwala. “There’s no better waterfront to showcase our sport, and there’s no better sports town than the Windy City.”

Chicago’s 31st Street Harbor plays host to the high-speed water event, where pro riders will race between 23-28 nautical miles, reaching speeds of up to 80 miles per hour. The weekend features three professional and three amateur races over two days, with multiple stand-up races throughout each day. The P1 AquaX pros will compete for 30 minutes, plus one lap, depending on conditions, which averages out to 17-20 laps per race. Stand-up races are 15 minutes, plus one lap. An awards ceremony will immediately follow the final races on Sunday afternoon.

Chicago sports fans of all ages are encouraged to attend, and best of all the event is free and open to the public. Competition is set to run from 11 AM to 3 PM CT each day (subject to change). For fans unable to attend, a tape delayed recap of the P1 Chicago event will air on CSN Chicago (airdate TBA), with a Facebook live stream available on the P1 AquaX Facebook page. Follow all the racing action on social media via the hashtag #P1Chicago.

A special bonus for the Chicago race, P1 Chicago, Yamaha and CSN Chicago, will be offering fans the opportunity to win a Yamaha waverunner and tow trailer by entering an exclusive P1 AquaX Chicago contest at CSNChicago.com/P1Chicago (no purchase necessary).

The room block for the Chicago hotel will be closing soon. If you plan on getting a room please do so ASAP!! We were able to extend it to August 15th but after that it will be closed. They did not provide a link for the discount. You have to call and tell them that you are with the Powerboat P1 group to get the discount.