In what can only be described as bizarre circumstances, Indiana's Christian Daly wrapped up the P1AquaX Pro Rookie of the Year title in Ft Lauderdale, this past weekend. The newly crowned IJSBA World Finals Champion, and ProWatercross World Champion, left Indiana with his Lakeview Marina SeaDoo RXT-X 300 determined to do whatever was necessary to take another title in the enduro series. To make things more interesting the water conditions were rough all weekend.

Just after taking the green flag to start race 1, the fuel pump to failed, stranding him on the back straight with no opportunity to score points. "It stopped so suddenly, I almost went over the handlebars" said Daly.

With the assistance of ace tuner and multiple time world champion, Tim Neff, every effort failed to fix the fuel pump issue and realizing that repairs to the boat could not be completed before race 2, Daly was forced to borrow a boat from friend, Kevin Sullivan. Sullivan's boat was set up for amateur races and therefore did not have the speed or acceleration of the Pro tuned boats. Daly finished in fifth place but was penalized two places for changing boats. 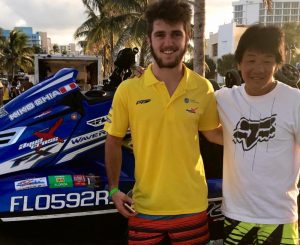 That night a new fuel pump was fitted only to learn that the issue was electrical and it kept blowing fuses. As race time approached Daly was forced to lean on a friend of a friend, and fellow competitor, Enrique Chia, offered him the use of another amateur tuned boat.

Race three was saw Daly bag more valuable points coming across the finish line in sixth place. Race four was a top shelf performance with everything to play for. Over the course of the 30 minute race, Daly caught and passed pro riders, Lagopoulos, Iantosca and Klippenstein to finish in a remarkable fourth place - which became second when reigning world champion Brian Baldwin and multiple time world champion, Chris McCuggage were docked two positions a piece for changing boats. Daly's second place was his best result of the enduro season, ensuring him the Rookie of the Year title. 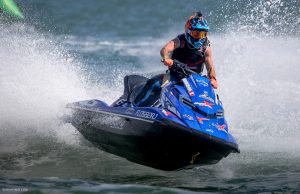 " This weekend was a mad scramble every day. At times I thought I might not get to race at all but having travelled that far we just couldn't give up. I want to thank Kevin and Enrique for loaning me their boats." said Daly. "I 've had to deal with almost everything in this enduro season from a big crash, to mechanical issues to some of the most difficult conditions ever, but at the end of the day a lot of people helped me to win Rookie of the Year - and for that I'm very thankful. Without Lakeview Marina I wouldn't have had a boat, without Neff I wouldn't have had the tuning knowledge and without my sponsors, I wouldn't have been able to commit to all the races this season. I'm sore everywhere but the effort was well worth it- what a weekend" 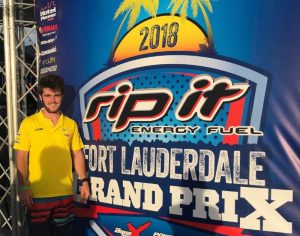 The season is not over yet for Christian. Stay tuned for details of one of the most exciting events of the year coming up in Thailand.