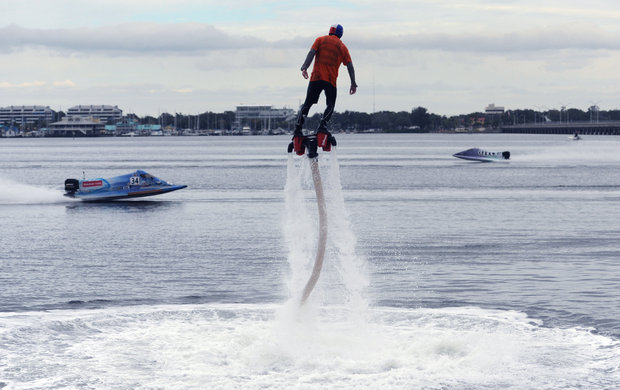 The phones at the IJSBA Headquarters have not stopped ringing ever since Mike Young brought racing to the Bradenton Riverwalk Regatta.  Tens of thousands of spectators witnessed some of IJSBA’s best competitors demonstrating why our sport is, simply put, the best racing known to man.  This event served as the first World Finals qualifier for 2015 and the amount of interest the Riverwalk Regatta has generated in IJSBA Racing has been huge!

Below is the press release and results of this very awesome event:

(Bradenton, FL)   The inaugural Bradenton Area Riverwalk Regatta (BARR) was held on February 6th on the Manatee River between the cities of Bradenton and Palmetto, Florida.  This family-friendly event featured F-2 Boat Racing, IJSBA Hydrocross Racing, Freestyle Demos, Sky Ski, Flyboard Demos, Sea Doo Test Rides, a 5K run, a children’s fishing tournament, Jefferson Starship on their 40th Anniversary Tour, Pogo sticks on steroids, and much, much more!!!  This event had something for everyone and the weather was perfect for the 100,000 + spectators that came out to witness history.

The 1st of 4 PWC race motos was the Pro-Am Ski Open Ski, which is the 1st IJSBA World Finals Qualifier in the Region and titled, ‘The Action-Kawasaki Florida Winter Championships/Mayors Cup presented by the Watercraft Superstore.  The racers were completely stoked when they seen the massive amount of race fans that showed up in droves and would not be disappointed, despite a slow start due to an F-2 altercation…however, Hydrocross racing with two demos would run on time and include Pro Freestyle demos by Chris Langlais and John Havell of Team XScream, and former US National Champ, Michael Ratti from the Blowsion camp!  The other Demo would feature Guinness World Record holder, Geno Yauchler on the Sky Ski, he is a 8 time Foil World Champion, Geno was joined by “Fly Guys” Jeremy Armstrong and Jonathon Brockoff on their FZR Racing Flyboards, made popular by our own Franky Zapata!  The final act before racing was Australian Pro Wakeboarder, Troy Roker, who threw more,” Tantrums” than a Dallas fan after the Green Bay game  :^}…just sayin!

On to IJSBA racing…The Pro Am Ski Class was the race on the docket and it would not disappoint as it boasted 18 racers with a super tight track and a rolling start…due to conditions beyond our control…and the 1st Holeshot of the day would go to…well, it was actually kind of a tie between Trinity Racing’s Johnny Smith and Cody McCallum, who just became a fireman in Lizella, Georgia!  Smith would hold on for the 1st moto and have trouble while McCallum’s teammate Broc Harris took advantage of his experience on a tight track and take the win.  The 2nd moto was a different chapter for Smith, who suffered a mechanical problem, and it left the door open for Broc Harris and Veteran racer, John Stevens,” the Ghost of Jet Sports Past”, to advance and take 2nd Overall spot, in front of the “Hyena” ,Kirk Britto, sponsored by Wade Chapin Performance and Optima Racing.com.

There were 14 brave Pro Am Runabout racers came to Manatee County, not knowing what to expect…I believe that people who read the Bradenton Herald leading up to the event , knew what to expect…as this local former Manatee Hurricanes high school football standout and HydroDrag World Champion, was deemed, “the Hometown Hero”!  It was an intense rolling start, fueled by Monster Energy/Kawasaki racer (and race favorite), Aqua X Champ Eric Francis had a tough extraction, which carried him, ungracefully, 150’ through the air at 85 mph…fortunately the only things Eric lost was an earring and the race!  Yamaha Racing’s Snyder would dominate from there and the second moto, finishing in front of Alabama’s, Chris Saxon and Georgia’s, Mike Bellamy!  Great show by all!!!

A GREAT BIG THANKS to ISM USA’s Mike Fetchko and Michael Dongilli for believing!  Also, John Havell and his staff at Action Kaw/Yam/Sea/KTM of Bradenton,  the Watercraft Superstore crew, Manatee County, City of Palmetto, Bradenton, FWC, USCG, and all of the Bradenton Area Riverwalk Regatta volunteers that pitched in.  The next hydrocross race in Florida is in Tavares on April 4th and 5th …I hope to see you there!  MikeY