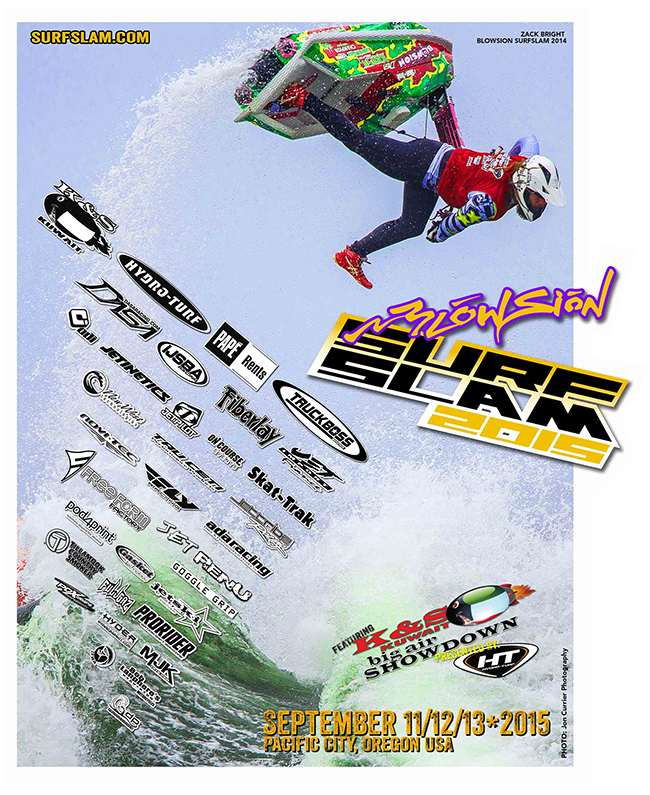 Join the world's most talented watercraft surf riders September 11th, 12th and 13th on the ocean beaches of Pacific City Oregon for 2015’s premier watercraft surf event. The Surfslam is being held for its 7th year at the pristine Tierra Del Mar Beach access located just north of Pacific City, Oregon and is free to the public. The Blowsion Surf Slam brings Pro, Amateur and first time Rookie competitors from around the world competing for cash purse, prizes and points towards the International IFWA World title, as well as the Blowsion Surfslam Championship.

The 2015 World Tour incorporates five international rounds with four prior stops already scored in Australia, France, Portugal and the UK. Watch it all culminate at the Blowsion Surfslam. A panel of expert judges will score the competitors in head to head double elimination format scoring  them 50% for their wave surfing and 50% for their aerial maneuvers. Not able to attend? No worries! Once again we will be live streaming the entire Blowsion Surfslam weekend.

K&S Kuwait is once again proudly presenting the K&S Big Air Showdown on Sunday with cash awards to the top three freeriders demonstrating the most aerial amplitude in this must-see contest of aerial cojones and carnage. All interested rookie, amateur and pro competitors for Freeride or the Big Air Competition please pre-register on the Surfslam website registration page.

Rounding out the amenities of this action packed weekend is the vendor and sponsor beach display area with food and beverage offerings to add to the festival beach and surf environment. With over three miles of open sand to drive on and launch from, be sure to bring your own rip lipping equipment to carve up some of the famous Oregon Pacific Ocean Surf.

Don’t forget to also click on over and check out the new Blowsion website for the latest product and apparel offerings and please support all the Surfslam Sponsors who make this event possible!