Press releases and posters are coming out of Blowsion this morning as they prepare to present another exciting Freestyle show under the London Bridge.  Seven days from now, the shoreline will be filled with spectators who will all be treated to some of the most extreme tricks and routines ever seen on a personal watercraft.  Here is the official release: 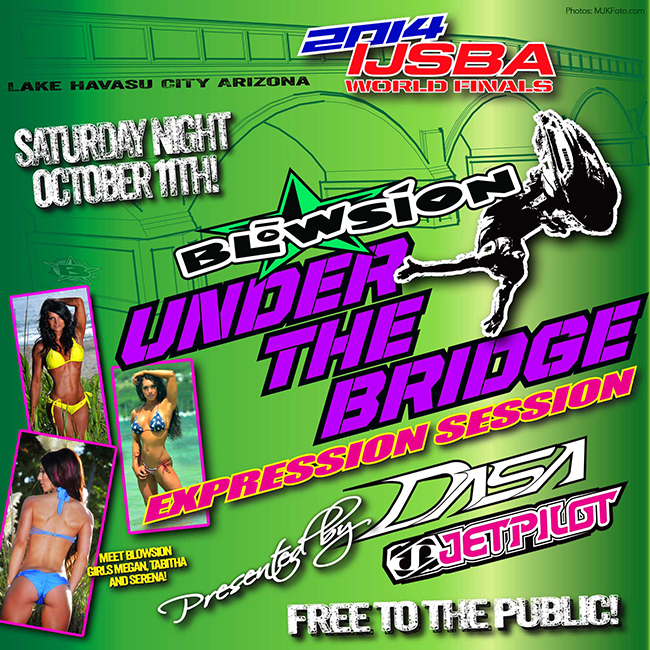 Blowsion has teamed up with core watercraft partners DASA and Jet Pilot in presenting the IJSBA World Finals Saturday night Freestyle show under the London Bridge on October 11th, 2014!

The Blowsion Expression Session will kick off first with exhibitions from Flyboard, Sea-Doo and Bomboard in the famous lighted channel under the bridge. Top finishing competitors from Saturday’s Pro Freestyle competition at Crazy Horse Campgrounds and Resort will then enter the water at the London Bridge Resort via a custom rail system provided by Jet Lift for a group Pro Jam session you dont want to miss!

Each competitor will then be allowed a one minute routine in order to further amass points in front of the judging panel for the final showdown on Sunday, October 12th. Dont miss seeing the very best of this planet’s PWC freestyle athletes do aerial tricks and stunts with their watercraft in ways you never before imagined.

Be sure to watch from the world famous Kokomos Night Club- unless you are under 21, in which case you will want to arrive early and grab a viewing spot from the London Bridge Resort’s English Village, or from the legendary bridge itself.