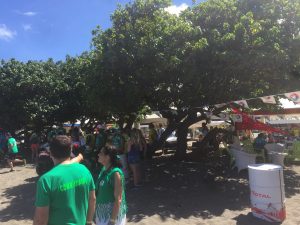 One day remains at Karujet 2017.  The famous French rider, Teddy Pons, continues to lead the event's Pro Open division with a lead of 4 minutes, 42 seconds over Francois Demori who has kept within  respectable distance going all the way into the final heat.  Anthony Granger, a local favorite in Guadeloupe, is still capable of regaining the lead.  In the Atmospheric Class Thomas Favolini leads Alain Martin with a lead of only 35 seconds.  Brice Lopez is trying to increase his third place standing by overcoming his 3 minute and 28 second deficit from the lead.   All three leaders are French and with a such close points margins, everyone is on their toes at ever lap.   The Amateur class is also being watched closely due to Pierre Claret leading Mathieu Bizon by a margin of just 3 minutes.  An American,  Gary Shriguey, is sustaining third place in this event that is frequently dominated by locals and French athletes.

The day was especially challenging with the spotting of some migrating whales in the proximity of the race course.  The competition had to be shut down until the marine mammals were safely out of the area.  The delay caused some frustration among racers who where already amped up and had face a delay at the last second. The delay went longer than expected and this caused some racers who were already amped up to compete a little bit of frustration.  Event manager, Eric Paulin, and race director, Thierry  Scharff immediately had a plant to combat a potential duel with a setting sun on the planned longest day of the event.    The final day's course and event plan was swapped with todays.  Once everyone was briefed and the whales were safely out of the area- the race began. 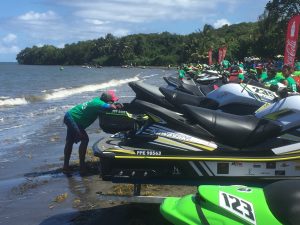 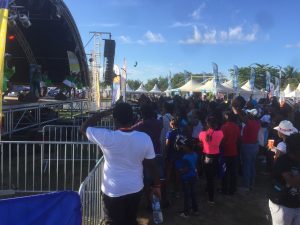 The video below is the start of the race.  Competitors has already been lined up for at least fifteen minutes and anticipated a start several times.  The starter was on top of the reach lift waiting for final confirmation of the whale watch to be cleared and for all rescue personnel to be in place.  Those of you considering joining this sport can get a glimpse into the emotions that exist during competition as well as the effects that adrenaline starts to have on the body when it is flowing but not used.  The competitor who as featured in this shot had difficulty getting his watercraft to start.