2016 Mark Hahn Memorial To Be Leg In New World Tour 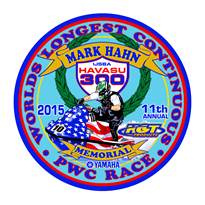 It was announced today by Mike Follmer and Jim Russell, producers of the 11th Annual Hot Products Mark Hahn Memorial Havasu 300 Presented by Yamaha, that their race will be the first stop on a NEW World Tour for PWC (personal water craft) endurance racing for 2016. For over a decade the Hot Products Mark Hahn Memorial Havasu  300 has represented the ultimate personal challenge to an ever increasing amount of international endurance racers eager to take victory laurels home from this, the world’s longest PWC race.

It covers 300 grueling miles over a 10 mile course  on Lake Havasu, Arizona with all refueling and rider changes taking place in actual race time, like the LeMans endurance race.  Now the challenge goes International, grows and moves to Vladivostok, Russia! There the IJSBA-Jetracer Russky Grand Prix will lay down the gauntlet offering 1,000 kilometers of racing over a five day period, August 12-17.

To be eligible for the generous purse offered in Russia, along with world bragging rights the racer must have competed and done well in the Hot Products Mark Hahn Memorial Havasu 300 February 27, 2016.

Jetracer, the promoting organization of the Russian event is offering an attractive package for the racer including entry, shipment of the watercraft to and from Vladivostok (returning it to Havasu in time for the IJSBA World Finals in October) and room nights in Russia. Visit  IJSBA.com for more information on both of these incredible races.